Las Vegas Mother Burst Out In Rage!! Calls For Teacher’s Resignation For Taping A Mask On Her Son’s Face!!

A recent incident annoyed a Las Vegas mum and now she is calling for the resignation of a substitute teacher of the Clark County School District. 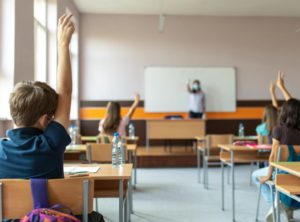 Recently, the news went viral regarding a Las Vegas mother, who imposed several allegations of the substitute teacher at her son’s school was forcibly taped a mask on the toddler’s face. She revealed the matter and wants all parents to be aware of everything happening inside the school.

In September, a Las Vegas school was fined after a mom claimed about its inefficiency to handle the children properly. The mother of 9-year-old charges a Clark County School District teacher and wants her to resign after they allegedly taped a mask to her kid’s face. 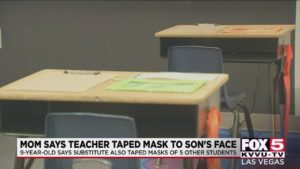 As per the reports, the woman, whose identity was kept under the shades, revealed that the substitute teacher at Carolyn S. Reedom Elementary School in Mountain’s Edge behaved inappropriately to his child as they taped a mask on her 9-year-old child’s face after he got up to take a sip of water and forgot to put the mask on.

The mother appeared annoyed, and she said, “He went to get some water, forgot to put back the mask. The teacher did not even tell him once to put it on or send him to the office. She instead pulled him up and tapped the mask on his face.”

She further added, “I was annoyed, very annoyed. I was scared for my kid about what kind of long-term effect it is going to have on him, the fact that everyone in his class was laughing at him.”

The mother further alleged the teacher to have added another layer of tape from the child’s forehead to nose before we took him to the office to pick up homework, he just had forgotten at home. 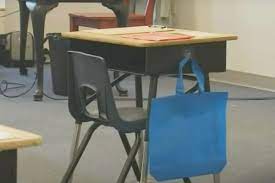 The matter ignited a hot debate among the netizens. One user commented, “I am all for the masks, but this sub is awful.” A netizen appeared incredibly annoyed and he quoted that the schools were this type of behavior is openly promoted must be shut down.

Another online community supported the mother and adviced her to drag the sub teacher to the court for fair judgement.