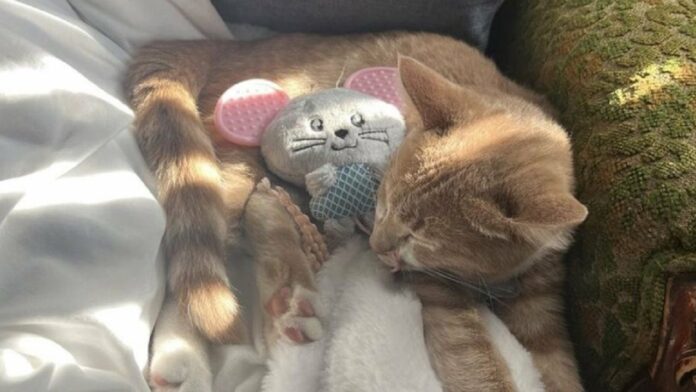 A 4-month-old kitten named Thor screamed his little head off, alerting his sleeping humans to a deadly leak of carbon monoxide that was filling their Michigan home, according to fire officials.

The Stamper family installed a generator in their garage after a power cut in their area. The garage door had been closed accidentally, allowing carbon monoxide to leak indoors.

According to the Farmington Hills Fire Department: Heidi Stamper and Ronald Stamper, their daughter Paige, 13 years old, and Quinn, 11 years old, were asleep in their beds, as toxic gas seeped inside.

Thor started crying when he got sick. His human mother took Thor outside to get some fresh air. He seemed to have recovered.

Thor and Heidi returned to the house. Heidi fell asleep again. Thor, now wide awake, began screaming again, this time alarming the children. The fire department said that Thor managed to wake up their semi-conscious parents, and they were able to get them outside.

“This is a frightening example of how carbon monoxide can accumulate quickly and potentially be fatal,” said Farmington Hills Fire Chief Jon Unruh. “Fortunately, this incident had a positive ending, but we hope all families will learn from the Stampers and keep their generators outside.”

Following the Aug. 30, incident, the family was taken to hospital and treated for carbon monoxide poisoning.

Fire authorities advised that generators should not be used in any type of structure. Instead, they should be used outdoors away from doors and windows.