Justin Bieber Fans Curious! Did He Accidentally Reveal That Hailey Is Pregnant? 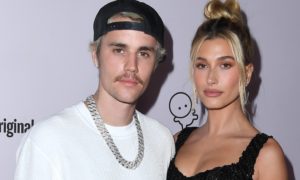 Monday night’s 2021 Met Gala was all about fashion as Hollywood’s biggest stars hit the red carpet in jaw-dropping ensembles. Still, for Justin Bieber and Hailey Bieber, all the buzz seemed to be on the possible expansion of their family. Fans of Hailey and Justin Bieber, who were married in September 2018, believed that they were due to have their first child together after a strange moment on the red carpet.

Walking side-by-side down the red carpet at the annual event, which boasted the theme “In America: A Lexicon of Fashion,” Bieber and Hailey pulled out all the punches to make a wave on the fashion scene, both opting for black-tie attire. The happy couple was delighted that photogs snapped a few photos of them. Bieber was seen gently placing his hand against Hailey as they took photographs. Many believe that he is pregnant.

Justin and Hailey Bieber arrive on the #MetGala red carpet together. https://t.co/vaX97iQM2B pic.twitter.com/RVYFu0Bs2o

After several people took to Twitter with comments including, “guys, I think Justin try to tell us that Hailey Bieber is pregnant” as they reposted the image of Bieber cradling Hailey’s belly, one TikTok user, according to the Mirror, set the speculation off to a new level. Analyzing the moment in question, the TikToker suggested Hailey told her husband, “don’t make it so obvious,” as she pushed his hand away. That user questioned, “IS JUSTIN AND HAILEY EXPECTING?” However, there were more than just a few who viewed the moment in a different light, with several people suggesting that instead of Hailey having advised Bieber not to “make it obvious,” she actually said something along the lines of, “they’ll think I’m pregnant.”

The couple has not responded to the rumors, which mark the second such pregnancy rumors they have faced this year. They previously shut down pregnancy rumors back in July after Bieber shared a photo captioned “mom and dad,” with Hailey later advising her husband, “I think you should maybe change this caption to Dog Mom and Dad before anyone gets it twisted.” The couple has, however, been open about their desire to one day start a family, with Bieber telling Apple Music’s Zane Lowe in February 2020, “I want to start my own family, in due time,” and later telling GQ that he “just felt like that was my calling. Just to get married and have babies and do that whole thing.”