MILAN – Jeff Goldblum infused Milan Fashion Week with some levity on Sunday as he shimmied down the Prada runway in a dark overcoat that cast a dramatic silhouette.

As co-creative directors, Miuccia Prada was able to present elevated versions of everyday items in their latest menswear collection. This collaboration has been going on for two years.

“We were thinking about meaningful fashion, pieces that make sense,” Prada said in the show’s notes. “Clothes that make people feel valued and are not to be discarded. 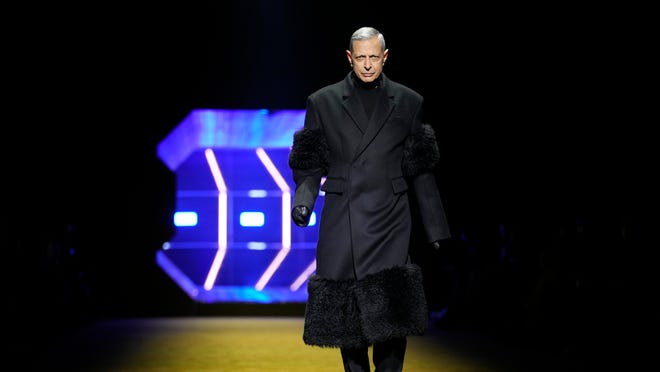 Both wore long overcoats. MacLachlan wore a light blue shirt and shimmering pants to contrast the MacLachlan, which was accented by furry trim. Goldblum’s coat was strikingly set off with furry trim. As if astonished to be seen emerging from a tunnel lit in purple, Goldblum sashayed along the runway.

The Fondazione Prada’s exhibition space was adorned with velvet-covered theater seats. The collection was anchored by durable outerwear and work clothing. Statement pieces such as long overcoats were finished in technical mohair. It was thick at the hem and ringed the upper arms. For maximum form, the shoulders could be emphasized and the belt pulled at the waist.

As the world struggles to recover from the coronavirus pandemic and makes new moves, the designers kept exploring the uniform. They created elegant, lightweight, almost formless coveralls in silk, leather, and cotton.

“They replace the traditional, historical shirt/tie/bow tie, and give a new energy and reality, a younger attitude also,” Simons said.

With the pandemic still raging, fashion designers took differing, even opposing, views of the current moment: That we are moving out of the darkness and toward the light – or that it is time to hunker down.

Indian designer Dhruv Kapoor took the former view, in a collection that unites masculine forms with psychedelic designs with the underlying message that it is mind over matter.

“I really want to push the power of the mind through this collection,” said Kapoor. “That is what I want, to spread love through the brand.”

“Linear time is an illusion” is embroidered in a burst of pink on a tailored overcoat, a job that takes 20 to 25 days to complete. Another slogan promotes “parallel worlds,” the notion that we can be in more than one place at a time. Felt hats with thick fringe represent dreadlocks worn by yogis and considered auspicious.

By contrast, Rome-based American designer Justin Gall’s debut Milan runway collection exuded the need for protection, to hunker down and wait it out.

The looks could outfit squads of survivalists caught in a dystopia, with a mashup of puffer jackets, vests and quilted trousers, layered or alternated with faux fur elements. Hoods were cinched tight over dark sunglasses, and pants alternated between heavy-duty leather with utility pockets and lightweight parachute material.

“A motivation of mine is survival. Gall stated backstage that this is what Gall was trying to accomplish. 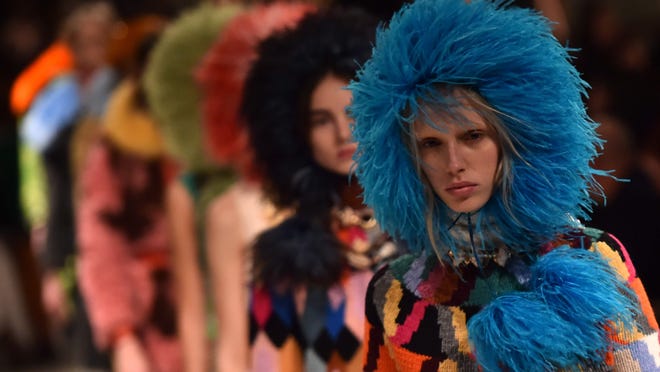