Indiana Jones 5 Could Be A Female!

By Amy Comfi
September 15, 2021
In
EntertainmentMovies

The future of Indiana Jones could look radically different in the future. The iconic character, immortalized by Harrison Ford, could be female moving forward. Here’s what’s going on.

‘Indiana Jones 5’ In The Works 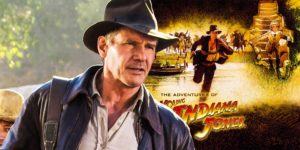 Ford will turn 80 in the next year. He’s getting injured on the set with increased regularity. His return in Indiana Jones 5 wasn’t exactly guaranteed, but it is finally happening. Disney has to decide the future role. One option is controversial.

Phoebe Waller-Bridge has awards aplenty thanks to Fleabag and will star alongside Ford in Indiana Jones 5 in an as-yet-undisclosed role. She’s got a stunt double, so we know the character is getting her hands dirty, and it looks like she’ll be playing Dr. Jones’ assistant.

The Daily Mail now reports that she could be replacing Ford in the title role in the future. An insider told the paper, “It would be a huge statement and a great role for Phoebe.” Spokesperson’s for Disney is staying mum on the subject so far. Another source said, “the gossip on the set is that this character will slot into the leading role.”

Remember when they did an all-female cast of Ghostbusters? That turned into the most disliked trailer in the history of YouTube. There are too many horror stories to count of actresses getting death threats simply for starring in male-dominated action movies. Bearing this tragic reality in mind, it should come as no surprise that this rumor’s reception has been mixed.

There have been rumors for many years that James Bond could not be a white man. It’s important to remember that these are only rumors for now. Waller-Bridge’s rise from Edinburgh Fringefest to Hollywood action star has been quick, so having her helm a Disney franchise is a pretty smart idea. It remains to be seen if she accepts Ford’s whip and hat. Indiana Jones 5 is currently scheduled for July 22, 2022.