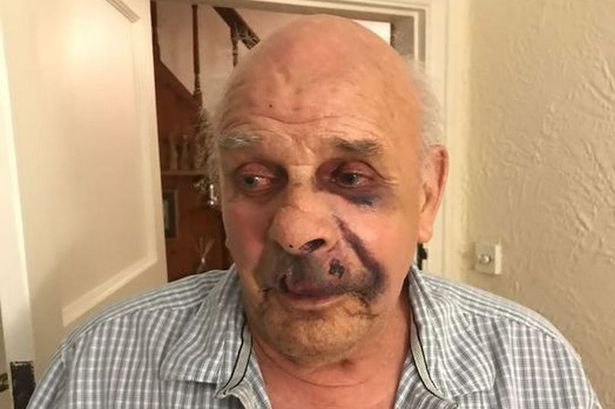 Joe Sharpe, 77, was savagely punched and kicked by two masked men after they broke into his home in Moor Green Lane, Moseley looking to steal an Audi S4 parked at the home

A pensioner who was brutally beaten in his own home by intruders demanding keys to an Audi car has told how he ‘thought he would die on his bedroom floor.’

The pair were looking to steal an Audi S4 parked on his driveway and shouted at him: “Where are the keys, bro?”

But the motor belonged to his friend who had taken the keys with him on a visit to London, Birmingham Live reports.

The vehicle has since been sold by Mr Sharpe’s pal as he was so “distraught” over the circumstances surrounding the pensioner’s attack.

The four-year-old grandfather suffered injuries to his spine, pelvis and both hips. He also sustained a bleed on his brain from the kicks to his face.

Mr Sharpe said: “I was totally confused and I thought I was dreaming until the pain kicked in.

“Before they were even asking for keys I was getting battered anyway. They were there with me for about five or six minutes.

“I was already unconscious so I could have a go at them. I was kicked by both of them.”

The retired electrician, who had his firm installing disco sound and lighting, said he had been asleep in bed, between 1.20 am and 1.45 am, when the attack happened last Thursday, September 23.

“First thing I knew I was pulled out of bed by my right arm and put on the floor,” he said.

“I was asked ‘where’re the f***ing keys?’ I said that I didn’t have the keys. I tried to explain but they were sceptical. I believe that’s the reason I received a kick.

“I think they were young. They asked me ‘wheres the keys, bro?’ They weren’t speaking a lot, but it was the one thing I caught upon.

“Although they were vague about the pain, it is very real. The pain is real. I want them to be caught.”

He added: “One of the men in the background became a bit afraid because I seem to recall someone saying “let’s get away from here.”

“Whether it was me being a little bit brave by shouting back or whether the guy thought I was getting too much (of a beating) I don’t know.”

According to Mr Sharpe, he could stay at Birmingham’s Queen Elizabeth Hospital for six weeks depending on how his body responds to treatment.

His son Tony Sharpe, 56, said: “I’ve read a lot of supportive messages out to dad from people he knows and even people he doesn’t know.

“He’s a lot more comfortable and chipper than he has been. He is feeling the love that all of this has brought him. While it is all a great help, the road to recovery will belong.

Mr Sharpe’s friend was so traumatized by the attack that he sold his Audi car.

“The guy whose car it was has sold it already. His dad’s friend and was so distraught he’s got rid of it,” He said.

“He said every time he gets in it he says all he thinks about is my dad, so he got shot of it. He was upset about it.

“It’s possible to replace the vehicle if they had stolen it, but dad can’t undo what happened.

“The only thing that can give him solace on the whole situation is if these guys are caught and brought to book. Hopefully, that will happen.”

Anybody with information about the incident can reach West Midlands Police by Live Chat or call 101. You can also quote crime reference 20/1757136/21.