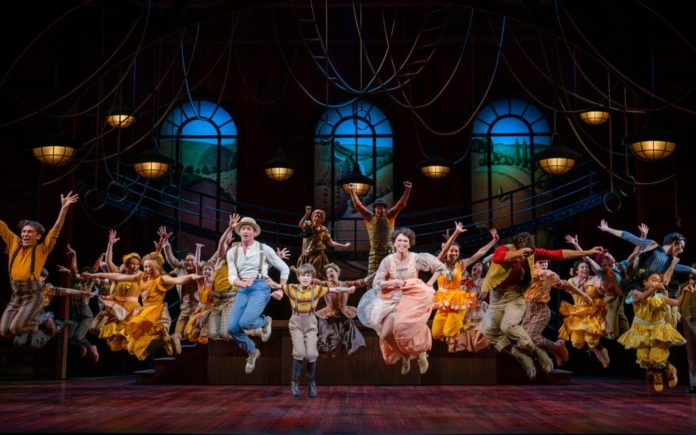 When people who dislike musicals talk about the musicals they dislike, there’s a decent chance they’re talking about musicals like The Music Man – whether they’ve ever actually ever seen The Music Man or not. Meredith Willson’s nostalgic slice of Americana was already proudly old-fashioned when it debuted in 1957, with “Seventy-Six Trombones” leading Broadway down a cornpone path that shows like the moody Carousel or the finger-snapping West Side Story were trying so hard to avoid. Not even The Beatles could make Music Man‘s lilting “Till There Was You” sound cool.

Now, many decades later – and several years after directors Ivo van Hove and Daniel Fish reimagined West Side Story and Oklahoma! in thrilling ways unthinkable when those musicals were young – director Jerry Zaks, producers Barry Diller, David Geffen and Kate Horton and a well-rehearsed cast headed by Hugh Jackman and Sutton Foster deliver a high-gloss Music Man as giddily backward-looking as ever.

Hard-hit and laid-up just weeks ago by Omicron, The Music Man, which opened Thursday at a celebrity-packed Winter Garden Theatre, certainly seems to have made a full recovery, at least if cheerful enthusiasm is any indication. (And for the record, producers Diller and Geffen displayed little indication of over-concern about Broadway protocol, sitting maskless in the audience throughout much of the evening.)

At this point, Jackman, one of Hollywood’s biggest stars, doesn’t need to prove his song-and-dance chops to anyone – he did that ages ago in The Boy From Oz (2003) and Hugh Jackman, Back On Broadway (2011). But no mind – he does it again. As the lovable con man Professor Harold Hill, Jackman seduces the River City yokels and, if advance box office is any indication, Broadway audiences with his sonorous voice gliding through “Ya Got Trouble,” “Gary, Indiana,” “Marian the Librarian” and, yes, “Seventy-Six Trombones.” If he doesn’t possess the entrancing, otherworldly smarm of the late, great Robert Preston – and he doesn’t – Jackman delivers on both the Broadway necessities and Hollywood charisma to recreate, in his own image, theater’s greatest flim-flam man.

Jackman is matched vocally – outperformed, actually – by Foster, whose singing is so good she very nearly convinces us that Music Man‘s maiden Marian is something more than a remnant of bygone Broadway convention. That’s a tall order.

Watch the 1962 film version again and notice how Shirley Jones offsets that girlish soprano with a steely reserve, as if her voice and her self-protection could crack at any moment under the queasy charms of Preston’s snake-oil attentions. But the days when we equate icy reserve for virtue are long gone, and besides there’s nothing unsettling or dangerous in Jackman’s nice-guy swindler. Marian’s surly-from-the-get-go demeanor and late-in-the-show reversal are no more convincing than the notion of Jackman as a bad-to-the-bone cheat. Try as they might, their chemistry rarely comes over as anything deeper than the pleasant-enough, vaguely campy Grandma Moses-style flats that, in Santo Loquasto’s set design, make an easy signifier of America’s mythical innocence.

Perhaps Zaks is, after all, attempting to modernize the characters, giving Marian an extra layer of grit, Harold a deeper sensitivity. The director is on record as having made cuts to rid the musical of negative Native American stereotypes, and songwriters Marc Shaiman and Scott Wittman reportedly were recruited to amend the leering nonsense of Act II big, early production number “Shipoopi,” (a futile effort, despite the ensemble’s lively dancing).

But tinkering here and there with the bullheaded Music Man is a losing battle  Barring an Oklahoma!-like revision, The Music Man, with its syncopated rhythms and rat-a-tat speak-sing style that, for all their catchy appeal, are not exactly the novelties of yore, will forever rise or fall on an audience’s taste for nostalgia. This, after all, is a musical that makes a repeated gag of likening townswomen to noisy hens (“Pick-a-Little, Talk-a-Little”).

So, rise or fall? This Music Man does both. The rousing ensemble numbers have their charms, like the unfailing show opener “Rock Island,” with its chug-chug-chugging cadence lurching to and fro with locomotive rhythms (Loquasto’s gorgeous train interior of dark wood and deep green velvets is an early visual high point). Is there another Golden Age (or close enough) musical that so economically and irresistibly sets up its entire premise in one fell swoop?

That premise, if anyone needs reminding, is this: A con man calling himself Professor Harold Hill goes from town to town bilking the townies out of money with various schemes, his latest being music: The professor stirs up fears among the elders about rowdy youngsters and their pool-playing, cigarette-smoking ways (“Ya Got Trouble”), his solution being to fill up those youthful idle hours with marching band practice – and he’ll sell you the instruments and uniforms.

“Ya Got Trouble,” Hill’s signature song, makes quick and good use of Jackman, who handles the tongue-twisting lyrics with ease, pretty much winning over both of his intended audiences – the River City townsfolk and the Broadway ticket-buyers – with grace and a high-voltage smile.

In short order we meet the Paroo family – Marian, the town librarian; her mother Mrs. Paroo (the wonderful Marie Mullen, a Tony winner for The Beauty Queen of Leenane), and little brother Winthrop (Benjamin Pajak, coming into his own with the crowd pleaser “Gary, Indiana”), a shy boy so self-conscious of his Sylvester the Cat lisp that he ventures barely a word.

Also on the scene is Mayor Shinn (Jefferson Mays), owner of the local billiard hall that Hill claims is the type of good-for-nothing establishment demanding the corrective of some good, old-fashioned Sousa tunes. Shinn’s vainglorious, stagestruck wife Eulalie (the redoubtable Jayne Houdyshell, stealing every scene as the musical’s funniest creation) might make for an even more formidable foe than her husband if her susceptibility to flattery didn’t make her such an easy mark.

You know the rest. Hill bamboozles just about everyone, including a soon-swooning Marian, and is just about to skip town with their cash when love gets in his way. Before the curtain falls, he’ll be offering up his own take of Marian’s lilting “Till There Was You.”

Warren Carlyle’s energetic, song-and-dance choreography blends vaudeville panache, ballet and pre-Depression dance craze, hitting all the right spots at all the right angles. Still, anyone who has seen the thrilling movies of MJ or the boundary-pushing explorations of Flying Over Sunset might be left a bit un-wowed. Like so much else with this Music Man, from Loquasto’s attractive, wheat-colored turn-of-the-century costumes to Brian MacDevitt’s autumn lighting, the dancing is expert – effortless even – yet still and all underwhelming. The Music Man lives up to every expectation except the most crucial one: Surprise.

Imagine if Zaks had really gone for broke and excavated what lies beneath all this bamboozlement. Could there be a better time to examine, even without sacrificing the musical’s light heart, whatever it is that lurks in the corners of an idealized America that so willingly gives itself over to the deceptions of con artists? Imagine if this production had made an honest attempt to figure out why Marian’s sudden (and unconvincing) acceptance of this deceiver is trumpeted as the height of romance?

There are no such moments in this production, though there are some delights. The set at one point opens up to make full use of the large stage to become a rather cavernous town library, an ideal and lovely setting for that most quietly disruptive of all its songs: “Marian the Librarian.” With all the whispered shushing and sneakily elongated phrasing (“libraaarrrrrrian”), the number gives Jackman and the ensemble a chance to display something unanticipated. He and the dancers are soon tossing books into the air, sending hardcovers sailing to be caught by hands across the stage, as if the entire troupe had become a single, collective and expert juggler. When Jackman gleefully spins himself atop a library desk and delivers a delighted “wheeee”, The Music Man frees itself from the confines of its own proficiency and presumptions, and for a moment we’re buying whatever it’s selling.