About 20 minutes into Jane Campion’s “The Power of the Dog,” Montana rancher Phil (Benedict Cumberbatch) is staring out at a sunlit mountain range. “What is it you see up there, Phil,” a farmhand asks. “There is something there, right?”

What Phil is looking at is a Rorschach-like dog’s face in profile, created by long-cast shadows in the undulating hills. We in the audience get a second chance to spot it about an hour later in the film. This phenomenon is known as “pareidolia,” the observing of familiar shapes or patterns in random objects. In Instagram parlance, it’s also known as Faces in Things.

The barking dog’s face can be seen slightly to the center-right in the mountain range. Here is a closer look:

During the pre-production stage of the film, Campion collaborated with her production designer Grant Major, cinematographer Ari Wegner, and visual effects supervisor Jay Hawkins to ensure that there was power, to be sure, in the dog. Major and Wegner are among the movie’s field-leading 12 Oscar nominees, along with director Campion and all four main actors. “I did quite a few sketches in the early days,” Major explained to . “I was trying to figure out for Jane what this dog shape would look like. I showed her my sketches, and she liked them but didn’t really buy into the version I had in my mind.”

Major’s drawings exploited the shape of the landscape’s hills. “My ideas weren’t to do with shadows as much,” he said. “My sketches were more of the actual form of the mountain range itself. But we always thought it should be a lighting effect, so that only at a particular time of day would the dog be visible.”

And lighting techniques fall under the director of photography’s department. Wegner, the Australian cinematographer whose credits include “Lady Macbeth,” “In Fabric,” and “Zola,” was eager to accept the challenge.

“The dog shadow was one of the very first things Jane talked about and conceptualized,” Wegner told . “Jane talks straight away about the things that she’s most worried about, which I love about her. She doesn’t procrastinate about addressing the things she’s most concerned about.” 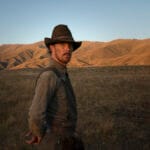 Wegner grappled with how clear-cut the image should be on the screen.

“It’s described very beautifully in the novel and in the screenplay, but there’s no literal description,” she said. “And cinematography is all about deciding, literally, what you’re looking at.”

Like Major, Wegner was initially thinking of the effect in terms of rock formations. “Like Elephant Rock in Iceland, sort of a ridge line, looking at it in more of a literal sense. And then (visual effects supervisor) Jay Hawkins and I were on a location scout, really late one afternoon, on a very wintery day. We were just walking back to the vehicle when we saw these incredible long shadows in the mountain. And the shadow looked kind of like a witch’s face.”

Wegner clapped her hands together while remembering the moment. “That cracked the code,” she said. 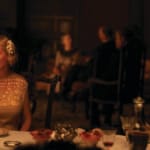 Hawkins worked to translate the shadow into a subtle digital image, which he presented to Campion. The filmmaker was delighted – and relieved.

“Jane said, ‘Oh, wow, this is incredible,’” Major remembered. “It worked for her, which was good because she was very anxious to get it resolved.”

The production designer, who helped build Middle-earth in all of Peter Jackson’s “The Lord of the Rings” films (winning an Oscar for the third), explained how the dog face shadow also bolsters the movie’s central theme. “It speaks to the different layers of what is seen and what is not seen,” he mentioned. “Jane said to me early on, ‘The story and the characters are really just a vessel for the emotional and psychological things that are going on underneath.’ So we were always making creative choices based on this below-the-radar character forming. And that’s the stuff we go to the movies to see.”

Or not see, as is the case with some audience members.

That ratio is fairly consistent with scientific data on pareidolia. In past scientific studies of the phenomenon, detection rates have reached as high as 41% Though still a fascinating topic among neuroscientists and psychologists, pareidolia is not, as once thought, an indicator of psychosis or mental imbalance.

However, it should be noted that in “The Power of the Dog,” it is used to form a kind of psychic link between the characters. For that reason, Wegner was all the more conscious about how the dog shadow appeared on screen. “I admit I was a bit nervous about making it feel plausible and beautiful, though fleeting enough, but also clear,” she said. “It’s quite a delicate balance. But we wanted to ride that line.” She continued, “We were okay if some percentage of the audience missed it, because it was definitely a film that we designed specifically so that there would be a lot more to discover on the second viewing. And the dog in the mountain was definitely a big part of that.”

Wegner, who could make history on March 27th as the first woman ever to win the Oscar for Best Cinematography, added with a smile, “Ultimately, I just really love that shot.”