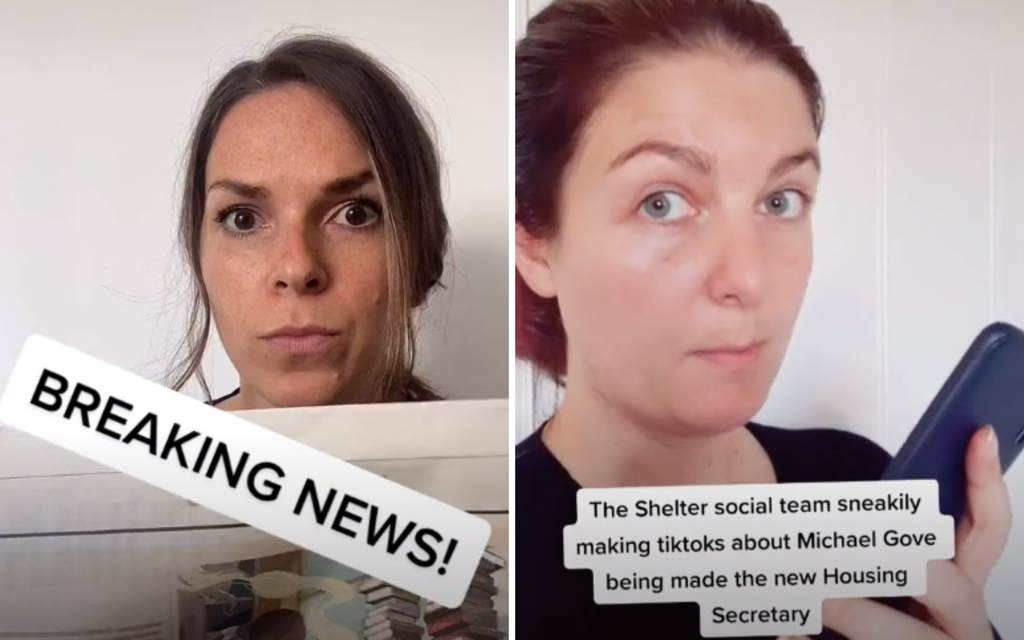 Housing and homelessness charity Shelter is using TikTok to educate and inform people about the ongoing housing emergency.

Following last week’s cabinet reshuffle, the organisation penned an open letter to the new housing secretary Michael Gove asking him to prioritise key issues of the housing emergency during his first 100 days in office.

Speaking to indy100, Brynolf said their aim is to make people stop scrolling for a moment so they can help them understand the crisis, and demand change from the government.

The team posts educational content that raises awareness for issues such as overcrowding, as well as videos around tenants’ rights that dispel common renting myths.

They use trending sounds, video effects, and challenges to reach as many people possible.

Brynolf said: “We’ve always been keen to make sure that our mission and our advice gets to young people, and TikTok is an ideal platform for that.

She said the response from TikTok has been great, particularly on videos that include straightforward advice on topics that can often be confusing, such as renters’ rights.

“If there’s anything we can do to help someone feel more confident and empowered before they reach a crisis point, I feel we’ve done our job pretty well,” She stated.

The open letter has been signed almost 8,000 times so far.

The charity is calling for Gove to address three key elements of the crisis within his first 100 days; bring forward the Renters’ Reform Bill to create a fairer renting system, build more social housing, and fund the ‘Everyone In’ initiative once more to protect those who are at risk of sleeping rough this winter.

Section 21 evictions — also called ‘no fault’ evictions — mean that private landlords can repossess their properties without having to establish fault on the part of the tenant, or provide any reason for why they want the tenant to leave.

The charity also points out that, despite the fact that there are over a million people waiting to be able to get social housing, only 7,000 new social homes were built in the last year. 192,000 children are living in social homes that are overcrowded today than they were five years ago.

In the immediate term, the charity hopes the ‘Everyone In’ initiative will be rolled out again during the winter. The campaign was announced by the government in January last year and saw 5,400 homeless people offered accommodation during the pandemic.

Chris Wood, Shelter’s Assistant Director of Research, Policy and Public Affairs told indy100: “This is a crucial time for someone to come in and get a grip on the housing emergency.

“The previous housing secretary, Robert Jenrick’s time will be defined by the pandemic, and the temporary measures he put in place to get rough sleepers off the streets, which undoubtedly saved lives. However, he never took the big bold actions needed to tackle the housing emergency.

“Michael Gove has a reputation for taking on big issues, and obviously they don’t get much bigger than this.

“Gove has spoken positively about social housing before, so we now need him to come in with a big bold vision to deliver more, and that’s how the government will get a grip on the housing emergency and tackle homelessness.”

Wood welcomed the huge response to the open letter, noting that renters in particular are frustrated as they feel powerless, and many pay extortionate prices for rental homes that are in poor condition.

He said during the pandemic, there was a huge surge in people seeking Shelter’s services.

“We saw people locked down in terrible conditions, in small spaces, families with babies who had no room to crawl and children with no place to do their homework, and no heating in the winter,” He stated that.

He said: “We’re calling for things that just make sense.

“Home is everything – it’s crucial. It’s the foundation to feel secure, to put down roots, and of course it’s the building block that enables people to get ahead and take opportunities in life.

“We can’t solve the housing crisis without more homes.”

Considering the importance of Gove’s new role as housing secretary, we hope he puts away his dancing shoes and instead rolls up his sleeves to solve this crisis.