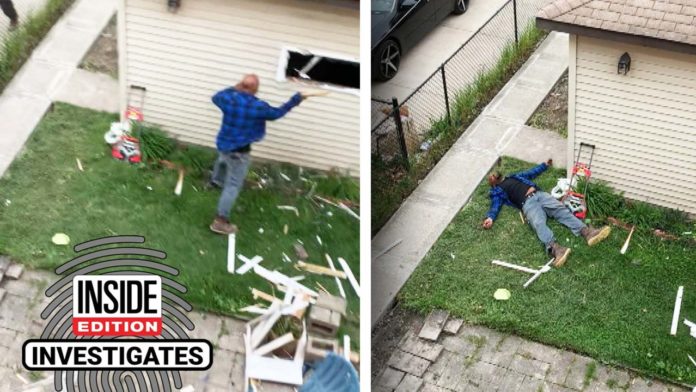 Jonathan Moody and his wife were stunned when a contractor they hired had an epic meltdown after becoming disgruntled, smashing the Chicago homeowners’ property before eventually collapsing.

The Moodys’ patio furniture and windows were broken in the incident.

“My wife was really, really terrified,” Moody told Inside Edition.

The couple says they found the contractor through HomeAdvisor, the digital marketplace that connects homeowners with local service professionals to carry out home improvement, maintenance and remodeling.

HomeAdvisor says it conducts criminal and financial background checks its service providers, so Moody was surprised to learn the contractor he hired to do a repair had a criminal record for burglary.

“So, we learned afterwards that he had a criminal background and a felony conviction,” Moody told Inside Edition.

Brian Corbin, the contractor hired by the Moodys, spoke to Inside Edition about his behavior that day caught on camera.

“I just lost it,” he told Inside Edition Chief Investigative Correspondent Lisa Guerrero. “I was struggling with substance abuse at that time. It was just a really bad day. There’s no excuse. [I’m] just glad nobody got hurt.”

HomeAdvisor said the company is “disheartened by the incident,” calling it a “rare case.” HomeAdvisor said they removed that contractor from their network and that his conviction fell outside its background check range, which extends back seven years.

But Inside Edition’s investigation found other instances where homeowners in the U.S. said they hired contractors through HomeAdvisor only to later learn they had criminal records.

“I trusted HomeAdvisor to help me find a safe, reliable, licensed contractor, and they didn’t do that,” she told Inside Edition.

Huber is a convicted felon with a criminal record dating back more than two decades, Inside Edition found. He also owes Campos thousands of dollars for shoddy work he never fixed, Campos said.

HomeAdvisor said that their customers are “always a priority” and that they have enhanced their screening process to “help prevent a similar situation from happening in the future.”

Jason Murtaugh is also a convicted felon who was hired by homeowners in Nebraska through HomeAdvisor. The homeowners Inside Edition spoke with said they gave him thousands for work he never completed.

“HomeAdvisor should not have allowed him to be in any of our homes,” one homeowner said.

“I was very angry,” another said. “It’s infuriating.”

HomeAdvisor said that after they denied Murtaugh access to its site, he fraudulently used an alias to get back on their network.

“I think people need to know that it’s dangerous and that HomeAdvisor isn’t really doing these screenings very well and they’re not removing contractors when they have bad reviews,” Moody said.

“HomeAdvisor has over 20 years of experience and has connected millions of homeowners to home pros around the country. We strive to create a good experience for every homeowner that uses HomeAdvisor, however, there are times where a consumer does not have a good experience. We are disheartened when this happens and always want to work directly with that consumer to make it right.

“We have a large customer care team that works closely with all customers and we value feedback from our customers.  We worked with the homeowners mentioned in this story, including Mr. Moody where we made many attempts to make him more than whole. These are rare instances, but we assure you that we did and will always do our part by screening the pros on our network, holding them and their work to high standards, and backing your projects when they’re booked and paid through our platform.

“Over the years, we have taken many steps to continually improve our screening process which we stand behind. When homeowners raise an issue to us regarding a pro, we immediately investigate and take action, which we did in these cases.

“We are firmly committed to creating good outcomes for our consumers and know that we provide an easier way for consumers to find pros to care for their homes.”