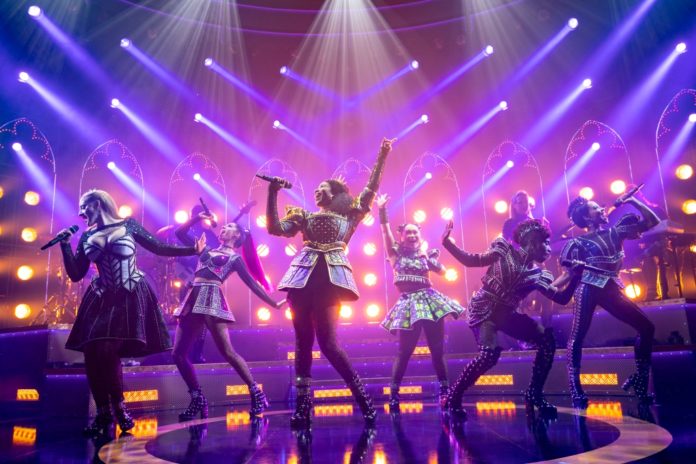 Gallows humor – and after the last 18 months, can there be any other kind? – is in exuberant form at Broadway’s Brooks Atkinson Theatre, where the terrific new musical Six just had its long-in-coming opening night.

Originally set to open on March 12, 2020 – Covid had other plans – Six and its sextet of singing, dancing queens has lost none of its vitality and charm over the ensuing months of darkness. If anything, the musical seems even more joyous for the time away. Take that, virus.

As unlikely a musical as the one with dancing cats, and, if Broadway stays healthy fiscally and otherwise, potentially as durable, Six mashes together history’s most compelling marriage stories with the brightest musical styles streaming today.

Placing Henry VIII’s six wives in a singing competition that owes a tad to American Idol, a little to RuPaul’s Drag Race and a lot to the smashing talents of its young composers Toby Marlow and Lucy Moss and the bravura performances of its cast, Six is irresistible from start to finish.

Introducing themselves by both name and fate – “Divorced, beheaded, died, divorced, beheaded, survived!”, they chant-sing – the wives, dressed in glitzy, geometric dresses that recall the space-glam flourishes of Lady Marmalade-era LaBelle, take the stage in a non-stop high-energy avalanche of sound. While each of the wives is given a contemporary musical niche – Catherine of Aragon hits the Beyonce-Shakira notes, Jane Seymour goes full Adele, Katherine Howard blends Britney Spears with Ariana Grande – the numbers, distinct and in quick succession, mesh like the colors of a nicely aged tapestry.

Co-directed by Moss and Jamie Armitage, with ebullient choreography by Carrie-Anne Ingrouille, Six is structured so that each of the wives takes a turn in the spotlight (though rarely without her rivals onstage and joining in either support or shade-throwing). Among the many clever twists, Marlow and Moss build the competition not only on the contestants’ musical skills but on the degree of tragedy each can claim.

So we get Catherine of Aragon bemoaning her pushed-aside status for a lovelier replacement, while Jane Seymour boasts of the early death that left her infant son motherless. Katherine Howard – with her purple-tinted Ariana Grande ponytail – bemoans a life of abuse and misuse, while Anna of Cleves mock-protests her dismissal by Henry because of her plain looks (“mock” because she’s all too happy left to her own devices in a nearby palace).

And Anne Boleyn repeatedly attempts to one-up them all, with no little amount of justification. When Jane, the only wife who claims to actually have loved Henry, remembers the good times, Anne snarks, “Yeah, actually come to think of it, there was this one really cute time where I had a daughter and he chopped my head off.”

Marlow and Moss’ book and lyrics might not translate to the page, but it’s worth a shot. Here’s some of what Katherine, christened “the least relevant” by the others, says when it’s her turn to tell a tale of woe, “Your lives sounded terrible. And your songs really helped to convey that.” And, “But seriously, Anna, all jokes aside, being rejected for your looks legit sounds really rough. I wouldn’t know anything about that.”

The production features the entire cast from its pre-pandemic go-round, and for good reason. Somehow managing to seem loose and improvisational without missing a beat, the cast (backed by a hard-rocking all-female four-piece band called The Ladies in Waiting) is pretty much flawless, one as good as the next and each distinguishing herself when the time comes. Adrianna Hicks plays the righteous Catherine of Aragon, Andrea Macasaet is Valley Girl perfection as Anne Boleyn, Abby Mueller (Jessie’s sister) is the power-balladeer Jane Seymour, Brittney Mack is the transcendentally independent Anna of Cleves, Samantha Pauly plays Katherine Howard with #MeToo fury and Anna Uzele brings everything to a surprising conclusion as a surprisingly enlightened and compassionate Catherine Parr.

Played out on Emma Bailey’s dazzling set that can shift from Vegas glitz to stained glass cathedral in the flash of Tim Deiling’s clever lighting design, Six never seems to take itself seriously until it does, letting its sly insights creep to the fore. No spoilers here on who wins – loses? – the singing-slash-misery competition, except to say that Six doesn’t so much rewrite history as recast it, putting Henry, Catherine, Anne, Jane, Anna, Katherine and Catherine in their proper places. When all is said and done, that particular king without his queens would be just another Henry.