Groom’s Father Ruins The Wedding Party Bringing His New Girlfriend To The Party!!

By Alex Johnson
September 9, 2021
In
EntertainmentViral

Recently, a woman labeled as the groom’s father’s girlfriend ruined their wedding party by stealing the spotlight. 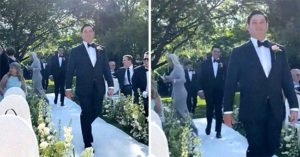 A Reddit user u/Jessica826 recently portrayed an incident where their father-in-law’s girlfriend ruined one of the most auspicious occasions of their life, their wedding ceremony.

She took to her Reddit account to post a video revealing the complete matter. The clip focuses on a lady making her way past the groom as he walks down the aisle. As she passes around him, he seems a bit annoyed yet appearing to be unsurprised.

It appeared that the men and wedding attendees were murmuring and having a chit-chat, while the father-in-law’s girlfriend quickly makes her way into the crowd and grabs her seat. While the commentators were busy titling her with different names, the poster labeled her “monster-in-law”. One of the users commented, “IDK if this was my wedding, I would have definitely stopped the show and kicked her out and restart it.”

The netizens showered their views on the lady. While some labeled her a narcissist and advised the Redditor to avoid her, some suggested that the bride and groom much not ruin their most beautiful moments due to the presence of a third person.

The poster also revealed that the transgressor not only commit a faux pas, but the “monster-in-law” also did not interact with the new couple for the rest of the weekend. One random user commented that if someone had committed this classic wedding offense, he would have thrown her out of the wedding ceremony.

However, Jessica826 replied to the comments of the netizens and revealed that there is more drama left. She went on to say, “There is more to the story (which involves her avoiding and disrespecting her husband’s late mother and passing us a… diatribe as we went to our honeymoon.”

However, later the new wife revealed that though there were few elements annoying them at the party, her father-in-law’s new girlfriend could not execute her plans and ruin the party. It was a memorable day after all these mess.