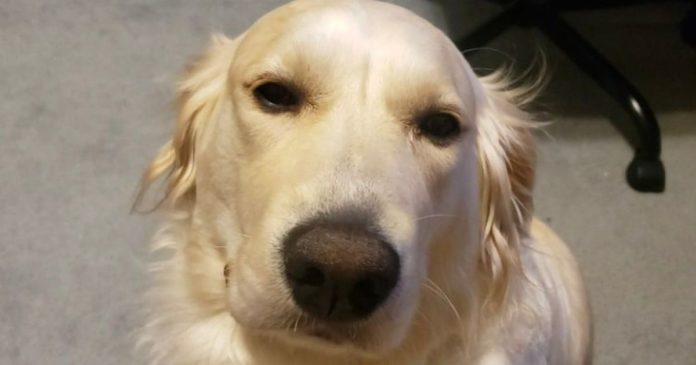 A golden retriever has gone viral for the hilarious groaning noise she makes when she wants to be stroked.

Rachel Kamens, who lives in New Jersey, was left scratching her head when she heard the sound emanating from her pooch, Biscuit.

Wondering if it could be something of her concern, the first-time goldie owner posted a clip on Facebook and asked for advice.

The heartwarming clip shows the almost three-year-old canine sitting upright in front of Rachel and making a low rumbling noise.

The intensity grows when Rachel pets her and scratches her chest.

She wrote in the caption: “My dog makes this groaning sound when she wants to be petted or is being petted.

“Does [anyone know] why one else’s golden do this? It’s almost like a snore.

“This is my first golden. I had no idea or [if it] was common, I thought I somehow caused a bad behaviour.”

Her clip has garnered hundreds of comments and, surprisingly, many dog owners said they their furry friends have a similar trait.

One said: “My goldie does this all the time for when she is being fussed over or if she wants food. She will sit there and stare at me with that noise. I love it.”

“Ours does that too!” a second commented. “Took her to the vet and they said it’s normal! It’s their way of communicating with us! We got special goldens.”

Others said the sound was startlingly similar to a farmyard animal.

“My one golden does this all the time,” a third said. “It’s her piggie snorts. I love it.”

While someone else agreed, adding: “We call it piggie sounds. All my goldens did/do this. It’s a golden thing.”

It’s a place where you can share a picture of your dog in our Top Dogs feed and share your doggy advice.

Some said they call the sound a “golden purr” – a dog version of cat purr when they are in need of human attention.

Rachel told Central Recorder: “I’ve had other dogs but there are not pure bred until Biscuit. None of them have done this and I’ve never seen a dog doing this.

“But a lot of the golden retriever owners report this same behaviour.

“It will last as long as we are petting her. Usually we would have to tell her to go lay down, or ‘that’s enough’.”

For more stories from Central Recorder, sign up to one of our newsletters here.