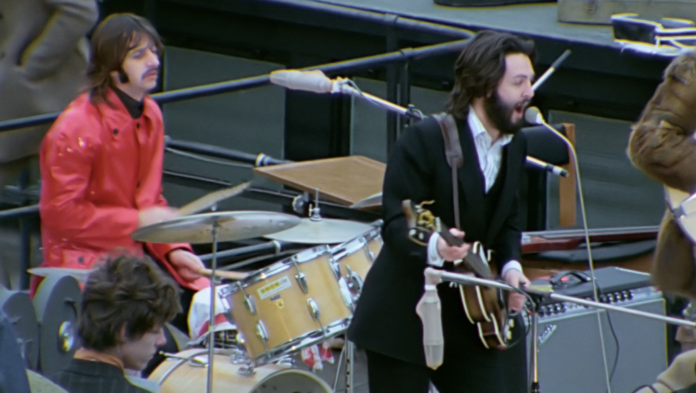 Peter Jackson’s The Beatles: Get Back – The Rooftop Concert is heading back to IMAX after a one-day, single-show screening last Sunday — the 59th anniversary of the band’s iconic 1969 concert. The show and live Q&A with Jackson beamed directly to theaters had its share of sellouts with audio and visuals about as close as possible to actually joining the band on the roof of their Apple Corps headquarters at 3 Savile Row. Disney and IMAX presenting it again Feb. 9 at 75 to 80 IMAX locations, then on 200 screens starting Feb. 11 through the weekend. (The concert is also included in its entirety in Jackson’s six-part doc series The Beatles: Get Back, which hit Disney+ last fall.)

The film is one of of trio of music documentaries including New Worlds: The Cradle of Civilization and Poly Styrene: I Am A Cliché in theaters this weekend. Also opening, Cannes Best Actress winner Renate Reinsve in Worst Person In The World, Norway’s Oscar-shortlisted submission for best international feature, and Cohen Media Group’s Breaking Bread – its first film of 2022 in a push by new distribution and marketing chief Justin DiPietro, formerly of IFC Films and Netflix. It’s also XYX Films’ first outing as a distributor with Ghosts of the Ozarks.

“Oscar voting has officially stopped, the Super Bowl is next weekend and you can find a hole,” said DiPietro. “The idea is to open NY and LA, and then roll out [Breaking Bread] to five or six top markets and about 35 the following weekend in Landmark theaters [owned by Cohen Media Group founder-CEO Charles Cohen] and some of the top arthouses.” Cohen Media is committed to theatrical (no day and date) and caters to an older demo that’s been the slowest to return to theaters. “We need theatrical to work,” he said. “We were waiting until that was an option.”

As Omicron wanes, is it? “That is certainly the hope,” although he and others note the normal playbook has been tossed out the window. DiPietro is penciling in a film every month to six weeks including Fernando León de Aranoa’s The Good Boss with Javier Bardem (Spain’s Oscar shortlisted international feature) and Israeli Oscar submission, and Cannes selection, Let It Be Morning by Eran Kolirin. (On Breaking Bread, CMG’s the head of acquisitions Bob Aaronson connected with director Beth Elise Hawk through a personal reference and screened the film at the Santa Barbara Film Festival.)

(Worth noting — Alamo Drafthouse, the hip cinema eatery chain beloved by the young indie crowd, yesterday announced plans to open seven new theaters between this year and next – welcome news to a specialty market that’s lost a few good locations to the pandemic.)

Back to the music: Cinelife Entertainment presents the alternative engagement New Worlds: The Cradle of Civilization. This unusual concert documentary, a blend of comedy, poetry, literature and music, was directed by Andrew Moscato and is toplined by Murray alongside world renowned cellist Jan Vogler, Mira Wang on violin and Vanessa Perez  on piano. The film captures the last European stop of a worldwide tour held at the 2,000-year-old Odeon of Herodes Atticus in Athens in 2018. It premiered at Cannes alongside a live performance by Murray et al. It opened on 150+ screens this week and will roll out on 167 more from today through Feb. 28 with one show per night.

Poly Styrene: I Am A Cliché opened Feb. 2 with sold out screenings in over a dozen locations, according to distributor Utopia. So the award-winning tribute to the punk rock icon, narrated by Ruth Negga and originally skedded for one night only, has booked encores into late Feb. including a weeklong run in LA at the Lumiere Music Hall (and a sold-out show and live performance at Zebulon) along with additional weekend runs in SF, Denver, Long Beach, Austin, Dallas, Seattle-Tacoma, Akron and Baltimore.

The film debuted at the Glasgow Film Festival with a North American premiere at SXSW. Co-written and co-directed by the singer’s daughter, Celeste Bell, it charts the story of Marianne Joan Elliott-Said, known by her stage name Poly Styrene, who fronted band X-Ray Spex in the 70s, becoming the first woman of color to front a successful rock band in the UK.

The Worst Person In The World by Joachim Trier, presented by Neon, opens in NYC (Angelika Film Center, Walter Reade Theater) and Los Angeles (The Grove, The Landmark in West LA). The decorated film follows one woman’s quest for love and meaning in the modern world. Fluidly told in twelve chapters, it has a breakout performance by Reinsve as Julie, a vivacious 30-year-old in Oslo who embarks on relationships with two very different men (Anders Danielsen Lie and Herbert Nordrum) in a search for happiness and identity. It’s got a 99% with critics, an 84% audience score on Rotten Tomatoes. Deadline’s review, here, calls it “a sharp and poignant look at how one’s supposedly best years pass by so quickly you barely realize it.” Neon is planning to expand to the top 15 markets on 2/11 and circa 200 runs on 2/18.

As noted above, CMG’s Breaking Bread opens in NY and LA (Quad and Nuart). Doc, directed, written and produced by Beth Elise Hawk, follows preparations for a food festival (the 2017 A-Sham Festival in Haifa, Israel) where Arab and Jewish chefs team up to create dishes celebrating the cuisine of a region where geopolitical boundaries are more defined than culinary ones. The festival was founded by Dr. Nof Atamna-Ismaeel, the first Muslim Arab to win Israel’s MasterChef, on a quest for social change through food. A 93% with critics on Rotten Tomatoes.

Dark Star Pictures presents Alone With You, a thriller feature debut written and directed by Emily Bennett and Justin Brooks. A young woman painstakingly prepares a romantic homecoming for her girlfriend but their apartment begins to feel more like a tomb when voices, shadows, and hallucinations reveal a truth she has been unwilling to face. With Bennett, Emma Myles, Dora Madison and Barbara Crampton. On four screens: Laemmle Glendale (LA); Film Noir Cinema (NYC/Brooklyn); Coolidge Corner Theater (Boston); The Frida Cinema (Santa Ana), and on demand/digital. Produced by Andrew Corkin (Martha Marcy May Marlene) and Theo James (Divergent) under their Untapped banner.

From Vertical Entertainment, Last Survivors. Suspense. Directed by Drew Mylrea. Written by Josh Janowicz. Starring Alicia Silverstone, Stephen Moyer, Drew Van Acker. Troy and his son Jake have been living off the grid for over twenty years. Every day is a fight for survival with Troy warning his son of dire consequences should he go beyond the barriers of the woodland utopia they’ve built. Jake’s chance encounter with a beautiful stranger sees their world unravel in a shocking flood of secrets and lies.

Elsewhere in specialty: MUBI presents Cannes selection Lingui, The Sacred Bonds from veteran Chadian director Mahamat-Saleh Haroun. A poor 15-year-old girl seeking an abortion in an Islamic African country where the practice is both taboo and illegal. A 97% on Rotten Tomatoes. Deadline review here.

Dekanalog presents Air Doll. Adapted from the manga by Yoshiie Goda with cinematography bt Mark Lee Ping-Bing (In The Mood For Love). A blow-up doll is given a soul and falls in love with a video store clerk. Opens on six screens including New York and LA.

From Film Movement, The Whaler Boy, a Russian drama written and directed by Philipp Yuryev about 15-year-old Leshka, who lives in a secluded village on the Bering Strait. The coming of age story in a male-dominated whaling community, is the Russian helmer’s offbeat debut and took home the Venice Days award at last year’s Venice Film Festival. Virtual theater screenings since Jan. 14. Opening at the Guild Cinema in Albuquerque today.