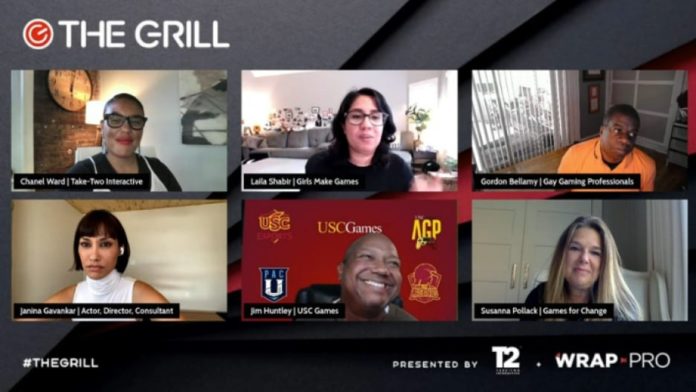 TheGrill 2021: ”For young people coming into games, it is as much a form of expression as it is a form of shared experience of play,“ says Gordon Bellamy of Gay Gaming Professionals

The average age of gamers may be 33, but it’s future generations of storytellers — particularly young women, gender non-conforming individuals and people of color — that will change the industry, the panelists said.

“At the end of camp, we read the game summaries the kids come up with … and [we’re like] ‘How are the kids thinking of this?’” she continued. “When I was 10, I was eating sand. How are these kids thinking about climate change at this young age, or the world I want to live in, empathy I want to build, in the player? They’re thinking about such complex topics that we only realize as adults because we face them… Here are kids who haven’t even stepped out of their homes trying to imagine what it’s like to be a different person, and I think that’s really exciting about giving kids the ownership to build their own games.”

Jim Huntley, professor and head of marketing at USC Games, deals with a slightly older age group: college students. But he, too, recognizes the need to target underrepresented populations (particularly Black and Indigenous people) early and provide access and support for them.

“A lot of the inequities in grade school begin to kick in because [students say] ‘Hey, I don’t have access to a computer lab. I don’t have access to computer science instruction,’” he explained. “How do we fill that gap so that we can make sure that those students way back in grade school have the option to even think about going down this path and then have opportunities to take that path and get into STEAM [science, technology, engineering, arts and mathematics]?”

Susanna Pollack, president of Games for Change, echoed that need for education. Her organization works with Title I schools (those where students qualify for free lunch) to create similar opportunities.

“We’re focused on reaching those middle and high school students, trying to get them to understand that they can become creators and not just consumers” of video games, she said.

In addition to STEAM skills, Pollack said students who learn about gaming gain “21st century skills,” including “how to become critical thinkers and problem solvers and collaborate with one another and realize they can bring their own talents. Even if it’s designing characters or writing scripts or coming up with music or doing research on a social impact because they want to make a game about climate change. They have something to bring to the table.”

“When I was coming up, games — be they video games or board games or even television — were around a set of shared rules that were externally created,” Gordon Bellamy, founder of Gay Gaming Professionals, said. “And we would all choose to jump into those worlds together for a certain amount of time and follow those rules. Today, the ownership of that rule set and those identities has been democratized to where I and you bring so much of yourself to a game, whether it be through the character you create, the device you play it on, to the stories you tell through your play. And so today, especially for young people coming into games, it is as much a form of expression as it is a form of shared experience of play.”

“The thing that excites me about this little part of this conversation is that all of us are so old,” filmmaker, actor and gaming consultant Janina Gavankar said with a smile. “We are talking in such binary language right now. In about two minutes, all these kids are going to be like, ‘What are these girl/boy bulls—? Who cares?”

“It’s changing so quickly and it’s really exciting because it’s just going to grow the industry and give us more experiences,” she added.

Check out the full panel here.

For over a decade, ’s Grill event series has led the conversation on the convergence between entertainment, media and technology, bringing together newsmakers to debate the challenges and opportunities facing content in the digital age. Tailored to C-Suite and high-level attendees, TheGrill presented by WrapPRO, delivers a unique series of curated discussions, industry panels and virtual networking activations that explore the ever-changing media landscape. View the full panel and all Grill content here: www.thewrap.com/the-grill-2021-welcome/