This week, Star Wars: Galactic Starcruiser at Walt Disney World opens to its first paying guests, offering them the opportunity to journey to a galaxy, far, far away like never before.

Ostensibly a “Star Wars” hotel, the Galactic Starcruiser tells the story of the Halcyon, a luxury cruise ship that is taken over by the villainous First Order. While you might have boarded the Halcyon as a guest, you are soon thrust into a real-life adventure, aligning yourself with the First Order, the Resistance, or in the morally nebulous grey zone of smuggling, in a two-day, two-night experience unlike anything you’ve ever seen. It’s a trip. And not just because you have to go to Florida to do it.

spent some time on the ship – not just a hotel, but an interactive experience that combines immersive theater, video games, escape rooms and performance art – and came away impressed. Sure, it offered all the thrills and excitement that you would expect from something conjured by the collective minds of Walt Disney Imagineering, the secretive group tasked with designing rides and experiences for the parks, and Lucasfilm, the home of “Star Wars.” But it was also surprisingly moving in a way that was entirely unexpected. In particular, the way you form bonds with characters on the ship (both human and otherworldly) and the way you feel connected to the ongoing narrative, left us, at the end of our tour, wiping away tears – and we only spent four hours onboard. (The actual two-night/two-day experience involves an away journey to Star Wars: Galaxy’s Edge, among other things, and is probably even more heart-wrenching.)

When did you guys first board the project and what was the initial pitch to you?

Anisha Deshmane: Well, I don’t know about you, Alex. I was told it’s going to be a two-day immersive story experience where our guests are going to go on an adventure, make choices that have consequences, interact with live performers, and all of it is going to connect in a way that we’ve never done before. And it’ll be brand new, the first time we’re ever doing something like this. It was really exciting.

Alex Lee: I first had conversations in 2016; a long time for a lot of the core team players on this project. And what I was pitched was, we were looking for an inventive entertainment business model that would really disrupt what the entertainment travel industry was at the time. And, and to look at the trend of immersive themed entertainment and how to take advantage of that and make that more accessible. Were there certain things that you immediately said, “We have to have this in the experience” and where did those core tenants come from?

Alex Lee: We knew when we started that there were some key principles and models that we really wanted to inject into this experience. We knew we wanted a level of immersive theater. We knew we wanted to integrate technology into it. We wanted to have safe, traditional theater elements as well and bring in new stories within the “Star Wars” universe, as well as play on some of the legacy stories and characters that we have. When we looked at the consumer insights that helped to identify what the touch points were as we developed this alongside Star Wars Galaxy’s Edge, helped create seamless experiences for theme parks.

Anisha Deshmane: I think there’s also an element there of gameplay, too. As you mentioned, making sure that this experience is a new version of immersive theater that incorporates a lot more of the passenger input, right? So everyone on board the ship is contributing to that story. Everyone on the ship is connecting the pieces that they see at bridge operations training and lightsaber training and the interactions that they have with performers in real life and their datapad, as well. And, making sure that it’s all sort of a seamless experience over the course of those two days.

Well, how do you keep people on track? Is there a “game master” that is on board that can keep people from coloring outside of the lines?

Anisha Deshmane: We do have a bunch of new proprietary technology that was developed specifically to create the logic of what the experience would be and manage the entire voyage to make sure that it does stay within certain bounds. But also, to make sure that you, as an individual, feel like you have a unique choice and that your path is different from everyone else’s.

You get to see this whole 48-hour plotline play out, but from your unique lens, from your perspective. The things that you might see are not necessarily the things that everyone else sees. If you look at that big finale moment that we have, each of the different choices that people are making on board the ship contribute to that moment. And so, while you might not understand every single thing that’s happening in that scene, someone onboard the ship contributed to making that happen.

We’ve heard a couple of times over the last couple of days that you can just go and hang out on the ship. What does that look like?

Alex Lee: We built this for guests who had all levels of affinity for theater and all levels of affinity for “Star Wars.” People who wanted to go in really heavy, LARP-style and play and for people who just wanted to have an opportunity to sit in the atrium with a drink and observe what’s going on around them. And for those who wanted to kind of delve in and out of it and take themselves out of gameplay and go back into play.

We’ve created storylines among all of our characters and in the interconnected story, where you could play as hard as you want and get all of the story details, get all of the mechanics, get all of the missions and objectives for yourself. Or, even if you’re sitting casually, you can observe what’s happening around you. You’re going to see and observe great big story beats. And you’ll be connected into that story because you really can’t escape it in the confines of the ship.

Anisha Deshmane: And as you jump in and out as well, we have what we call these invitations to play. There are these different moments throughout the voyage, based off of how much you’re leaning in, or leaning out or taking a break, or rejoining the story, that there’s always something for you to do. There’s always a way for you to engage with a character or engage with a particular plotline and push that forward. Can we talk about the performers?

Alex Lee: Sure. They’ve been workshopping, play testing this since October of last year. Just to ground how intense of an experience this is. I know you felt a four-hour version, but they have 48 hours of Material and story to learn. So much dialogue, a lot of it is improv, but, there is a lot of story points that they’ve got to remember. And, having scripted moments, again, keeps things on those guardrails that you’ve talked about. We don’t necessarily have a game master, but these performers are all acting in these guardrails. They know exactly what they need to be doing down to the minute and what story they’re conveying to you and how to manipulate audiences and keep them emotionally attached to that story. That’s all credit to the performers.

Anisha Deshmane: And their performances are also integrated into a lot of the things that happen while they’re off stage as well. Right?

Anisha Deshmane: That relationship that you build with a character when you interact with them in person, then continues in the digital version of that character on your datapad. If you meet Sammie, you help him with a secret mission that he has going on. Then later, he may reach out to you and ask you, “Hey, here’s the next step of that mission. Here’s the next step of that storyline.” We’re going to do this through the datapad now, and, connect those relationships together.

And there was a lot of collaboration between the live entertainment teams, the cast training and the data pad development, to make sure that it felt seamless, felt like the same character. It’s all coming from one voice. It’s all making sure that you are continuing that relationship regardless of how you’re interacting with that particular character.

Are you keeping an eye on these first few months? Could the story develop and things could be added or elaborated on?

Alex Lee: The “Star Wars” universe always expanding, growing. That’s why you have this slate of new characters here that closely tie into our legacy and beloved characters.

Anisha Deshmane: One of the exciting things about this too, is that every voyage feels a little different depending on the group of passengers that are currently on board. They form the emotional center of the voyage. And so, we know that it’s going to change a little bit, especially as we have new guests coming on board each voyage. There’s definitely a little bit of adjustment period after we launched to make sure that we are presenting the best possible experience for them. 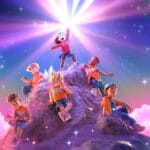 What are you most excited about people experiencing?

Anisha Deshmane: I think what blows people’s minds the most is that the actions that they take and the storyline that they sort of experience as they go through this have consequences. The choices that you’re making, the people who you’re choosing to help, the secrets that you’re choosing to keep close to your chest are all playing out in very unique ways, aboard this ship in a way that I think people are not expecting. It’s like a real-life RPG.

And it really is. It’s such a personalized experience that takes course with many other guests. And so, my favorite thing, honestly, is watching people talk about what they’ve experienced and say, “Well, I saw this thing. What did you see? I saw this other thing.”

There’s a lot of that. And, it means that everyone’s experiencing that story through their own lens. Which is really unique for this particular product.

Alex Lee: I’m really excited for guests to observe and be a part of a really diverse galactic cast. We’re really proud of the roles that we’ve created, the stories that we have created and the opportunity that we had to tell one overarching entertainment storyline and narrative through different lenses and different perspectives. And, to allow people to understand that there are different perspectives in the galaxy, that there are ways to play and converse and all of that.

Previous articleTaron Egerton Faints During Performance, Tells Fans He’s Fine
Next articleWhat a Personal Trainer and Mom of 4 Is Buying at Costco This Month