By Amy Comfi
September 30, 2022
In
EntertainmentCelebrities 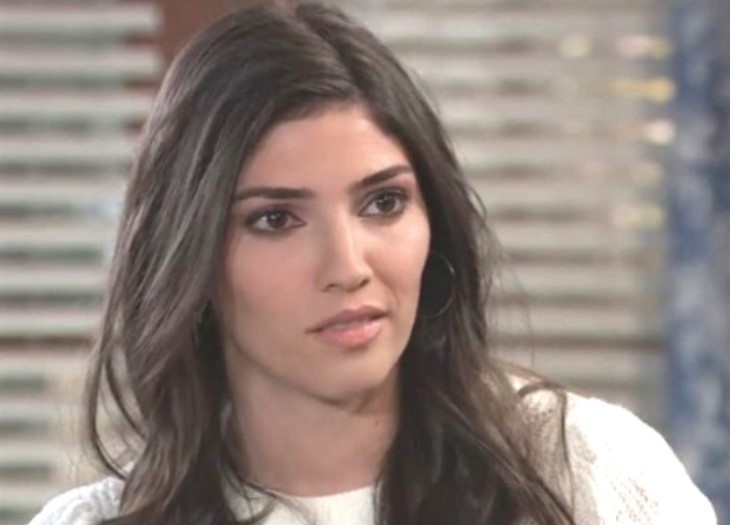 Brook Lynn offers some encouragement to Harrison Chase (Josh Swickard), as he gets ready for his big performance at The Savoy. Chase is in a towel, obviously fresh out of the shower, but it’s rather strong “encouragement”, as she tells him everything they’re working towards all rides on tonight. Chase should do just fine, considering the fantastic job he’s always done during his past Nurses’ Balls performances.

Chase still looks nervous but perhaps it’s because there is a lot riding on how he does. He’s no longer on the Port Charles Police force and this performance decides on whether his new career is in music or not.

At the Metro Court Valentin Cassadine, James Patrick Stuart (Finola Hughes) discusses a potential ally with Anna Devane. Valentin and Anna are still trying to figure out how to get his daughter, Charlotte Cassadine (Amelie McClain) out from under his father Victor Cassadine’s (Charles Shaughnessy) thumb without endangering her. It’s clear that Valentin has someone in mind, and he asks Anna what she thinks about the idea. Valentin says he thinks she’ll work just fine and that she’s the answer.

At GH Ava Cassadine (Maura West) looks like she’sWhile she is all healed up and is ready to be released, there is one thing that she must first attend to. She talks to Elizabeth Baldwin, (Rebecca Herbst) who’s dressed in her hospital scrubs, and Elizabeth looks a bit surprised. Ava tells Elizabeth that there’s something she and Elizabeth need to settle, and she could only be referring to her previous conversation with Trina Robinson (Tabyana Ali).

Trina confided to Ava about a dysfunction in her friendship Cameron Webber (William Lipton), over her keeping secrets that were concerning her. The teens appeared to have settled their differences, with Trina understanding Spencer Cassadine, (Nicholas Chavez), and Ava thinking of Trina like a daughter.

Elsewhere, Ava’s husband has a bone to pick with Elizabeth’s boyfriend, as a confrontation ensues between Nikolas and Finn. Nikolas is telling Finn that something he’s done or said is a big mistake, and it’s going to cost him. He is probably referring to Nikolas and Elizabeth’s being alibis for each other the night of Ava’s attack by the hook murderer. However, Nikolas and Elizabeth go back to teenagers in their friendship and he may be upset about Finn trying to drag Elizabeth’s past back to her memory.

Victor is shocked as he speaks on the Pentonville Prison telephone to Spencer, who appears a little bedraggled from what we can see. It seems like Spencer may have been beaten down, despite the prison walls protecting him and Sonny. Victor claims, “My God, Spencer, what happened”?

It’s obvious something untoward happened to Spencer in the prison, and Victor will be looking to correct it, as will Sonny when he finds out. Spencer will for now have to be strong and take care of himself.

Elsewhere, Nina Reeves (Cynthia Watros) is shocked as she asks someone if they know who’s behind these attacks; she must be talking about The Port Charles Hook. Nina is obviously intimately involved in the current situation, with Ava being attacked, Sasha Gilmore Corbin(Sofia Mattsson), becoming widowed, and Diane Miller (Carolyn Hennesy), hospitalized. She could be talking to Sonny although the preview doesn’t show the other person. Sonny has been diligently working to identify the monster who seems to be targeting his friends and family.

Sonny’s already been using one of Selina’s people as he had her thug Carver (unnamed actor) working on Dex Heller (Evan Hofer). Selina and Sonny are at the Metro Court as she asks him if he’d like to see her team. Selina appears to be joining hands with Sonny to help find The Port Charles Hook.

Sonny has been returning more to the mob Sonny, and leaving more of his amnesiac sides. “Mike” behind. Nina wouldn’t like to see what goes on in the freezer at Poluzzo’s!

You can keep up with all the latest happenings at GH. Keep checking this site often for General Hospital news and spoilers.

Previous articleVivica A. Fox explains why she believes Will Smith ‘Deserves a second Chance.’ This is in addition to the critical comments she made after Oscars Incident
Next article9-1-1 Lone Star Adds Lucifer To Season 4 And Suits Vets To Season 4. This Enhances Former Guest Stars Role