Frankel recently revealed to her podcast listeners that she has known of the alleged Girardi fraud claims since 2017. She also threw Kyle Richards and Lisa Rinna under the bus. Frankel claims that she warned both Beverly Hills wives that Erika did not have the money she claimed to have on the show.

Camille responded to a question from a fan on September 18. The fan asks, “Camille, did you hear of the Tom and Erika rumors before she came on the show? “Yes,” Camille answers. “One of the housewives mentioned it at Andy’s baby shower.” Andy Cohen’s baby shower took place in January 2019, Erika Jayne joined the Real Housewives of Beverly Hills in 2015. 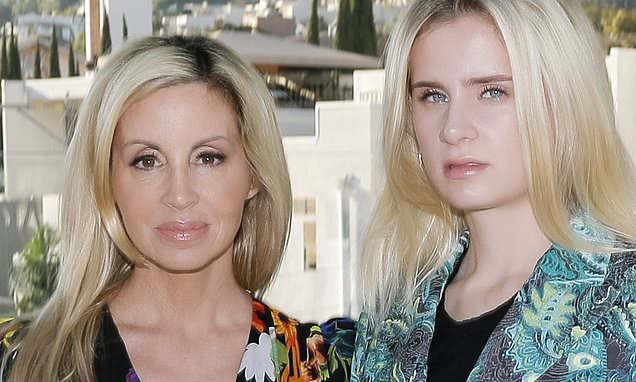 Camille Grammer didn’t quite spill as many beans as Bethenny Frankel on Erika and Tom’s legal problems. However, she made sure her followers knew the information has been making the rounds for quite some time now, according to Reality Blurb.

As for Frankel’s dirt, she revealed that her late fiance Dennis Shields shared the news with her some time ago. Additionally, Frankel claims Shields stated that Tom owed him half a million dollars.

That is an interesting reveal, one that could put other RHOBH stars in a very compromising position when it comes to maintaining their friendships with Erika Jayne. Grammer also shares her feeling about the housewives’ Season 11 reunion looks.

Camille holds nothing back, stating, “Not feeling the [RHOBH] reunion looks this season.” However, it appears that Camille only shouts out praise on Crystal Kung Minkoff’s look calling her dress classy.

Another fan commented to Grammer that she loved Kathy Hilton’s look and felt the look was timeless and classy. However, Camille Grammer must have gone with the old ‘If you can’t say something nice’ point of view, totally ignoring the commenter’s post.

So unlike the former Bravo star, Kathy Hilton’s carefree attitude leads us to believe it wouldn’t matter either way how Grammer felt. As previously reported by TV Shows Ace, Kathy Hilton has acquired quite a large fan following since joining the RHOBH‘s Season 11 series.

Kathy Hilton has added a certain zest to the reality series. From everything, including her hilarious catchphrases to her fabulous dinner parties, Hilton has gained the admiration of everyone. Andy reveals that he loves every minute of Kathy this year. We have to admit this season of RHOBH‘s has been one of the best to date. Fans reveal they can’t wait to see everything that goes down in the upcoming reunion.