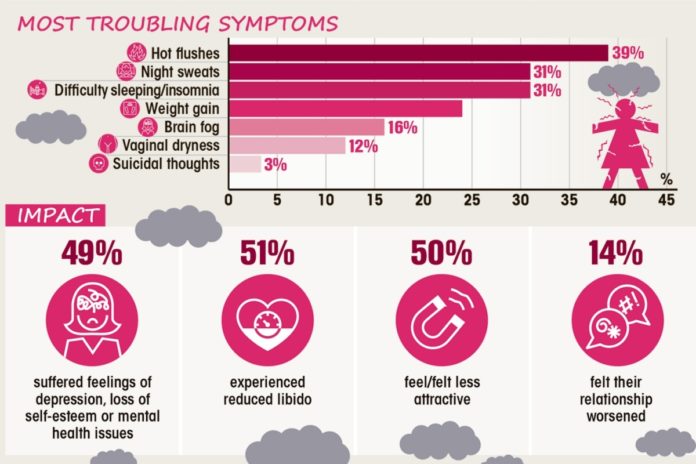 THE menopause is often dismissed as just a few hot flushes.

But it can cause everything from brain fog and brittle bones to depression, insomnia, loss of libido, thinning hair and heart palpitations.

As part of our Fabulous Menopause Matters campaign, we lay bare its shocking toll — to help women have the healthy menopause they deserve.

Exclusive research carried out for us revealed half of menopausal women suffered depression and mental health issues.

In our new campaign — backed by MPs and celebrities — we are calling for free HRT (Hormone Replacement Therapy) on the NHS for all women.

Labour MP Carolyn Harris is proposing a new law to waive prescription charges on HRT. The bill will go before Parliament on October 29.

We are also asking employers to create workplace policies to support menopausal women.

And we want to see action to bust the taboos surrounding the subject and to help women thrive.

Hailing our “fantastic” campaign, the mum-of-three tells Fab Daily: “Nobody talked about it when I was in my early 40s.

“I thought it was something that happened in your 50s. You got a couple of hot flushes and then you were through it.”

Davina, an ambassador for The Menopause Charity adds: “I had no idea about the importance of hormones and how much our body needs them.”

“Every woman at 45 should go and speak to their doctor and talk about it. People don’t understand the other symptoms.”

In medical terms, a woman is menopausal 12 months after her last period, but symptoms can start many years beforehand — a time called the “perimenopause”.

Along with the mental health issues, our research found 70 per cent of menopausal women experienced hot flushes, 62 per cent battled night sweats and 54 per cent had difficulty sleeping.

Meanwhile, 16 per cent said their brain fog was the most debilitating symptom.

Many of these symptoms can be cured by HRT, but a flawed 2002 study linking it to breast cancer left women scared to take it and doctors reluctant to prescribe it.

When it is offered, women still have to pay £9.35 per prescription — and with people often needing more than one a month, many are unable to afford the potentially life-changing treatment.

70 per cent of menopausal women experienced hot flushes, 62 per cent battled night sweats and 54 per cent had difficulty sleeping

The result? Millions are left feeling abandoned and questioning their sanity.

When Kathryn Colas, 70, started experiencing rages and dark depressions two decades ago, she thought she was having a nervous breakdown.

And she found herself screaming at her husband of 25 years about anything from household chores to cooking.

Kathryn, from Uckfield, East Sussex, did not know it at the time, but she was in the grips of the menopause.

Over the next ten years, she would tell husband Antonio she wanted a divorce, walk away from the career she loved and question if she was losing her mind.

She says: “I felt completely lost and questioned my own sanity. I was in such a dark place. I wondered if it would be best if I wasn’t here at all.”

The menopause can take a big toll on relationships and sex lives. Just over half (51 per cent) in our poll said it lowered their libido.

And 14 per cent said their relationship became strained. As Kathryn’s marriage with Antonio, 74, fell apart, she found herself “retreating into her shell”.

Like pregnancy, menopause is a time in a woman’s life when extra support at work is vital

When a trip to celebrate their silver wedding anniversary in 2006 turned into one constant row, the couple, who have three grown-up children, decided to separate for a while.

It left Kathryn on the brink of suicide. “Again, I questioned my own sanity,” she says.

But it is not just relationships that suffer. More than a quarter of women said the menopause placed a strain on their work life — and only 11 per cent said their employer was understanding.

Four per cent said the strain was so bad they had to quit their job.

What is the menopause and what age does it usually start?

Menopause is a natural part of ageing, which usually happens when a woman is between the age of 45 and 55.

In the UK, the average age for a woman to go through menopause is 51.

It occurs when oestrogen levels in the body start to decline.

During this time periods become less frequent or they can suddenly stop, and after menopause occurs women will be unable to become pregnant naturally.

Around one in 100 women experience menopause before the age of 40, and this is known as premature ovarian insufficiency or premature menopause.

Many celebrities have spoken out about their own experiences, including Lisa Snowdon, Davina McCall, Michelle Heaton and Zoe Hardman.

What are the symptoms?

Menopausal symptoms can start months or years before your periods stop, and can last until four years or longer after your last period.

Like pregnancy, menopause is a time in a woman’s life when extra support at work is vital.

Without it, talented employees are lost and the gender pay gap widens. Kathryn quit her job as a sales and marketing director for a hotel in Surrey.

“I felt I couldn’t cope with anything any more,” she says.

“I was used to balancing so many plates in the air and now they all came crashing down around me.

“Having a major role running a hotel was the best job ever. I was good at it and I loved it. But suddenly I felt out of my depth.”

Despite a catalogue of crippling symptoms, many women spend years suffering in silence

On one occasion, Kathryn flew into such a rage she swept everything off her desk. “It was over nothing,” she says. “I just saw red. I wanted to smash everything.

“I didn’t know what was going on. I began to research my symptoms — the arguments at home, my lack of control at work.

“I wrongly diagnosed myself with bipolar disorder. This is when I resigned and said I couldn’t work.”

Despite a catalogue of crippling symptoms, many women spend years suffering in silence.

Just 39 per cent polled have spoken to their GP or another specialist.

Fearing she was having a breakdown, Kathryn went to see her GP, who referred her to a psychiatrist.

But her symptoms were mistaken for depression and she was offered antidepressants instead of the HRT she needed.

It is a familiar story. Our research found 42 per cent of women were offered antidepressants or medication other than HRT. Of those, 25 per cent took the drugs on offer.

Kathryn declined and sought help from Professor John Studd, a retired obstetrics and gynaecology expert she met at a British Menopause Society event.

Through him she learned her mental health issues were related to hormones and it was part of the menopause.

Kathryn says: “Like so many women, I had no idea how severe the impact could be.

Some specialists implied my experience was rare, but it isn’t.” Five years after she first started experiencing symptoms, Kathryn was finally offered HRT.

Our research found eight in ten who take HRT said it helped improve their lives — and without any side-effects.

Working with experts, the Fabulous Menopause Matters campaign aims to help all women — regardless of their age, income and background

She reveals: “The impact has been significant. I found my ‘normal’. I felt good on waking up. I felt creative.

“As it began to have an impact on my mood, I realised that I loved Antonio, I always had. Thankfully, he forgave me and we’re still together 15 years on.”

Fabulous GP Dr Zoe says that for most women with no previous family history of breast cancer, the benefits of HRT outweigh any risks.

An estimated one in five of the UK’s population are currently experiencing it.

Yet the menopause is still whispered in hush tones like it’s something to be embarrassed about.

The stigma attached to the transition means women have been suffering in silence for centuries.

Central Recorder are determined to change that, launching the Fabulous Menopause Matters campaign to give the taboo a long-awaited kick, and get women the support they need.

The campaign has three aims:

50% of respondents said there is not enough support out there for menopausal women, which is simply not good enough. It’s time to change that.

And she advises: “If your GP is reluctant to offer HRT, speak to another GP, or book an appointment with the practice nurse.”

Another big issue women face is how the menopause affects their appearance and self-confidence. Our poll found 56 per cent gained weight, while 28 per cent noticed hair loss and 32 per cent had more facial hair.

The single mum to twins Abby and Beth, 23, tells Fab Daily: “One of the biggest problems was joint pain.

My knees were so bad people had to haul me up out of the car.

“I wasn’t able to carry on with my normal gym routine and as a result I found myself battling the bulge, having put on a stone.

“It was a struggle to leave the house as I hated my appearance. I lost eight years of my life. I felt washed-up . But it doesn’t have to be this way. If women got support, there is life post-menopause.”

Working with experts, the Fabulous Menopause Matters campaign aims to help all women — regardless of their age, income and background.

By giving them the tools and access to medical care they need, the menopause scandal can be a thing of the past.

It is time to stop surviving and start thriving.