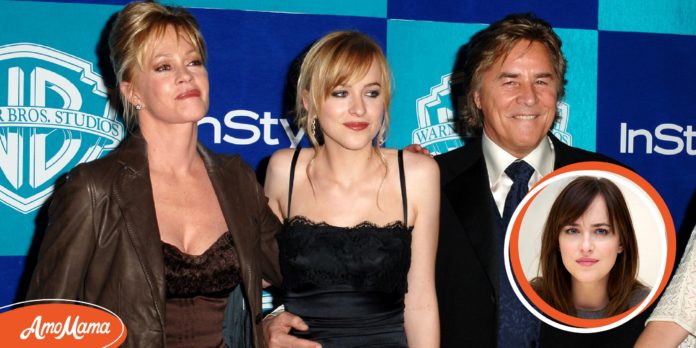 Dakota Johnson had a rough childhood, and could barely afford groceries after her father, Don Johnson, cut her off financially for refusing to go to college. But she never lost sight of the prize. Her father believes that she is a better actress than him.

“Pacific Heights” actress Melanie Griffith was only 14 when she met “Django Unchained” actor Don Johnson. Their paths crossed on “The Harrad Experiment” set, in which Johnson co-starred alongside Griffith’s mother, Tippi Hedren. Johnson was 22.

They started dating when Griffith was 15 years old. In Laurel Canyon, they moved in together. They were married on Griffith’s 18th wedding anniversary. Their romance was a six-month affair that ended in July 1976. They separated in November.

Theirs could easily be considered a union made in heaven because 13 years after splitting, they reunited. Although they didn’t plan to marry immediately, they found out that they were soon pregnant with their first child together.

Although Griffith had always wanted to be a mother to Johnson’s children, this unexpected pregnancy was shocking. Once Johnson received the news on the “Miami Vice” set, he remained mushy-faced and could not hold his joy. Johnson told Hedren:

Actor Don Johnson leaves the Newsroom restaurant after having lunch with his daughter Dakota from his marriage to Melanie Griffith March 30, 2002 in Los Angeles, California | Source: Getty Images

They welcomed their baby girl Dakota Mayi Johnson on October 4, 1989, at Brackenridge Hospital in Austin, Texas. At the time of her birth, Johnson was in Texas filming “The Hot Spot.”

Growing up with movie stars for parents may seem appealing, but Dakota struggled a lot. Her childhood was unconventional because she spent most of it on TV and movies sets.

Her parents would stay on location for months, and Dakota would tag along, tutors and nannies in tow. She changed schools so many times because of her parents’ demanding jobs that she lost track of the number she attended.

She mourns lost childhood friendships but what appeared odd was how she started therapy at three years old. “I was a disaster, and I thought for so long that there was something wrong with my brain. Now I realize that it just works in a different way.” She says.

Her parents divorced a second time when she was seven, which was hard on young Dakota. She found an escape in film and would watch “Beetlejuice,” “Home Alone,” and “Mary Poppins” over and over again.

She became obsessed with John Cassavetes, Bernardo Bertolucci, and Bernardo Bertolucci later. Up until she got to the age 16, Dakota studied ballet. Dakota knew that film was her passion. She was raised in a family of entertainers and acting seemed like the ideal career path. She recalls:

“I thought, this is just what my family does. It’s like, my dad’s a lawyer, so I’m a lawyer. Except that it doesn’t usually work that way.”

At an early age, Dakota discovered that she could become an actor like her parents. Dakota was 16 when she completed high school. It wasn’t an option for her to go to college, as she struggled with learning.

During an interview on “Late Night with Seth Meyers,” Johnson shared how all his children were on the payroll and were required to stay in school if they were to remain on the family’s salary. Dakota did not care.

Dakota did not care.

Taken aback, Johnson asked her if she remembered she would be off the family money if she did not attend college. He wondered how she would manage without financial help from her dad, and Dakota, unbothered, answered:

“Don’t you worry about it!”

Being cut off was more challenging than Dakota had anticipated. She recalled: “I remember one time having like 47 dollars in my bank account and not being able to buy groceries like… you know my card declined and things like that. And just being like, ‘Is this really what I want?’. But it was really what I wanted.”

DAKOTA SOON GOT BACK ON HER FEET

A screenshot from Dakota Johnson’s first movie role on “The Social Network” where she played Amelia Ritter | Source: YouTube/Vanity Fair

Despite her dad cutting her off and Dakota sometimes struggling to buy groceries, she did not stay down long. Three weeks after her talk with her dad, she landed her first role in David Fincher’s “The Social Network.”

She shared how nervous she had been playing Amelia Ritter — a young student from Stanford University — who sleeps with Sean Parker, played by singer Justin Timberlake, one night after meeting him at a bar.

From there, she began landing more roles, including a small part as Fugazy on “21 Jump Street,” Audrey in “The Five-Year Engagement,” and Em in “Date and Switch.

Griffith is proud to be a parent and she supported her daughter by being her date at 2015 Oscars. However, despite her unending support for her daughter, Griffith shared that she never watched “Fifty Shades of Grey” as it would be strange.

Johnson shares the sentiments of his ex-wife, and admits that he didn’t get around to seeing the movie. Johnson did not take it personally. His adamant refusal to see the movie was based entirely on the nature of the film. He told People:

“I would never see that. Even if she was in it, I wouldn’t be able to see that. It’s not for me.”

“As a father there are some images you don’t need in the head. I know it’s just pretend-and-make-believe, but, you know?” He continued. He still loves her films and is supportive of her.

HER FATHER THINKS SHE IS AN EXCELLENT ACTRESS

Despite his decision to cut her off years earlier, Dakota managed to pave a career for herself without her parents’ help. Following her appearance in “The Fifty Shades Of Grey,” she began landing more significant roles and has not looked back since.

She also got back in her dad’s graces; today, he is one of her biggest supporters. He thinks of her as an outstanding actress, perhaps even better than her parents, who’ve been actors for decades.

Today Dakota is more than just an actress. She has also crossed over into directing with her initial works in the 2021 film “Am I OK?” and the 2022 “Cha Cha Real Smooth,” in which she also plays Domino.