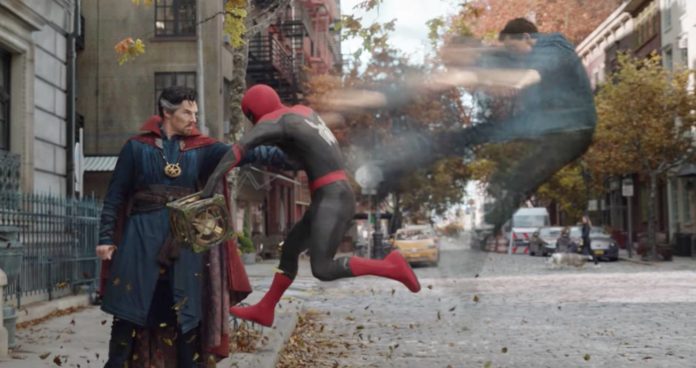 Doctor Strange in the Multiverse of Madness is six months away, but we already have a few massive spoilers about the movie that might spoil the most important development in the multiverse storyline. Loki unleashed the multiverse in the MCU, and What If…? started teasing the endless possibilities. But it’s Spider-Man: No Way Home that will give us a better taste of the multiverse in a live-action format. And it will culminate with Doctor Strange 2, which will be an MCU horror story. That’s what various reports claimed about the movie’s script last year. A huge leak gives us a few massive spoilers about the horrific storyline. Before we jump into it, you should know that significant spoilers follow below.

Of all the MCU Phase 4 titles, Doctor Strange 2 is the only one featuring a massive spoiler right in the name. We knew this would be a multiverse story because of the title even before the leaks started arriving. That’s why we said all the crazy Doctor Strange 2 rumors that dropped in early 2020 made sense.

That “Multiverse of Madness” subtitle gave Marvel a blank check. Marvel creatives could do anything they wanted with Doctor Strange 2 because it’s a multiverse movie. That storyline element makes possible all sorts of scenarios, including cameos that wouldn’t otherwise make sense. Early rumors claimed that Marvel characters from the Fox universe might spill into Doctor Strange 2. Similarly, we heard that dead Avengers like Iron Man could also appear in the film.

None of those leaks and cameo spoilers could be verified. Fast-forward to September 2021, and Marvel has already completed Doctor Strange 2 principal shooting. Marvel also finalized some of the reshoots. That’s to say that the rumors and spoilers carry a different weight compared to the early 2020 leaks. Back then, Marvel was changing directors and refining the script.

With all that in mind, it’s not surprising to see that big Doctor Strange 2 leak floating around. We’ve already started dissecting it, explaining the brand new Avengers alternative team and the main villain’s identity. Remember that huge spoilers follow before you click on those links or read what’s about to follow.

We can’t have horror movies without horrific deaths in it, and Doctor Strange 2 is that kind of a film. Not to mention that Marvel isn’t afraid to use the death of important characters to drive the story forward by signaling that the superheroes aren’t guaranteed to survive by the end of a story.

On the other hand, Multiverse of Madness will apparently use the same death trickery that we saw in Infinity War and Endgame. Again, it’s the multiverse. Marvel might not always kill main Avengers characters. And when it does, it could always come up with replacements. Gamora (Zoe Saldana) and Loki (Tom Hiddleston) are two such precedents. The MCU characters died in Infinity War, but Marvel brought them back as two variants from other realities.

A Doctor Strange 2 leak circulating on Reddit gives us plenty of spoilers from the movie. One of the main takeaways is that Wanda (Elizabeth Olsen) is the main villain, and she’ll continue to harm others while trying to reach her children. That includes killing other characters that oppose her along the way, including Illuminati members from a different multiverse.

A more detailed version of this leak sits on Discord, giving us plenty of additional details. Before we get to the Illuminati deaths, we’ll see Mordo (Chiwetel Ejiofor), Doctor Strange (Benedict Cumberbatch), and Wong (Benedict Wong) die. That’s the MCU Mordo, whom Wanda will kill. As for the other two wizards, they’ll be variants from a different reality.

The main Doctor Strange will travel to several realities while trying to hide America Chavez (Xochitl Gomez) and protect her from Wanda. Chavez can travel freely between realities, while Wanda can only astral project to different timelines.

According to these spoilers on Discord, Wanda will end up killing at least two Illuminati members from a different reality. One is a character that hasn’t appeared in the MCU so far, Balder the Brave. The other is an X-Men cameo we’re dying to see, Charles Xavier. It’s unclear who plays Xavier, but several leaks said so far that one of Fox’s Professor X versions will have a cameo in Doctor Strange 2. Killing Xavier would give the Fox universe a proper nod, but also a final send-off. Marvel’s mutants plans do not include the Fox stories.

Captain Carter (Hayley Atwell) and Captain Marvel might also be hurt in the Illuminati vs. Wanda battle. By the way, it won’t be Carol Danvers’s Captain Marvel version in the film, but Monica Rambeau’s (Teynoah Parris).

As for Doctor Strange, he will face an evil version of himself in a different reality. We already got a preview of such a fight in What If…? episode 4. The live-action performance should be even better. This time around, it’s evil Strange that dies.

On top of that, Wanda will murder additional wizards that stand in her way. At least that’s what these Doctor Strange 2 spoilers say.

That said, we have no guarantees that any of this will go down as described in these leaks. But we can be confident that Multiverse of Madness will be darker than your average MCU story.