The David Bowie documentary “Moonage Daydream,” which had its world premiere at the Cannes Film Festival on Monday at midnight, begins with a quote in which Bowie talks about Friedrich Nietzsche’s late 19th-century proclamation that God is dead and that humans must become gods themselves. It’s an appropriate enough opening, considering that Bowie’s most famous character, Ziggy Stardust, flirted with Nietzsche-style notions of man and Superman.

But a more telling quote comes later in Brett Morgen’s film, when Bowie talks about his fascination with “an artistic language that deals with fragments and chaos.” Because if there was ever a documentary that embraces the idea of fragments and chaos as organizing principles, it’s “Moonage Daydream,” which abandons all thought of straightforward narrative in favor of an immersive and purposefully mysterious and chaotic Bowie experience.

Or is “purposefully chaotic” a contradiction in terms? Regardless, “Moonage Daydream” is a bracing, gloriously messy (or, more likely, gloriously messy seeming) celebration and immersion in all things Bowie. You won’t get a biographical breakdown, except in bits and pieces and through the process of absorption rather than explanation; what you will get is an assemblage of live clips and interviews and animation and effects plucked from throughout the Bowie archives and knitted together with an extraordinarily dense and at times even assaultive sound design. 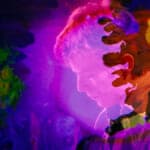 In case you’ve forgotten, the last line of the chorus in the song that gives this movie its title is “freak out in a moonage daydream,” which is pretty much what this movie does.

If that description scares you, then “Moonage Daydream” might not be the Bowie movie for you. But if you’re enough of a fan that you relish sinking into a seething morass of Bowie-ness, then by all means see it in the biggest, loudest place you can find once Neon brings it to U.S. cinemas. The film takes an approach somewhat reminiscent of Todd Haynes’ brilliant 2021 documentary “The Velvet Underground,” which used music and experimental film to put you inside the Velvets’ music, and pushes it to another level.

While Morgen’s best-known films include “The Kid Stays in the Picture” and “Jane,” “Moonage Daydream” is closest in tone to his 2016 film “Kurt Cobain: Montage of Heck,” where he used the late musician’s home recordings, drawings and journals to paint an intimate and mesmeric portrait.

That film was likely a strong reason he was given access to Bowie’s exhaustive archives in 2017, shortly after the singer’s death. Since then, Morgen has worked his way through that material — but rather than saying “look at this cool old stuff I found,” he’s used it to create a cool new thing. 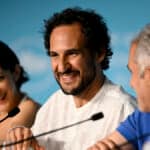 The opening stretch sets the tone. We hear Bowie’s voice, in a deep rumble, talking about time. There are snippets of broadcasts, flashes of images, then the acoustic guitar line that starts Bowie’s first hit, “Space Oddity,” then the piano line from another outer-space classic, “Life on Mars,” then the roaring, lesser-known later-day song “Hallo Spaceboy,” accompanied by images from Georges Méliès and Fritz Lang and many others, shots of fans and glimpses of Bowie himself.

And it builds from there, through early concert footage (“The Wild-Eyed Boy From Freecloud,” a raging “All the Young Dudes,” “Moonage Daydream”). The film gives you great Bowie performances and then frames them in a rampaging act of art assemblage — which makes sense for an artist who explains in one interview that he was looking for “a pudding of ideas” and wanted to establish the 21st century in 1972. “I was a Buddhist on Tuesday, and I was into Nietzsche by Friday,” he adds.

Throughout most of the film, which runs two hours and 20 minutes, the music never stops; we may be hearing Bowie talking, but insistent snippets from his songs run under every word. Sonically and visually, it’s an amazingly intricate act of construction, a restless movie that never relaxes or lets its audience relax. That means it might exhaust viewers who can’t surrender to it, but it also means that passionate fans will embrace it fully. 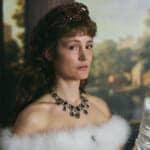 For those of us in that camp, the experience can be bracing and the highlights are many. They include a fearsome version of “Cracked Actor,” a magnificent “Heroes” and a homestretch that plays like a tribute to personal and professional contentment until it explodes into a “Hallo Spaceboy” reprise.

But really, every viewer will likely have a different set of highlights and a different list of songs they wish were included. Mine would include more from “Station to Station,” along with songs like “Suffragette City” and “Rebel Rebel,” and it’d even throw in some Tin Machine; yours might include a different batch altogether. Morgen’s Bowie is different from your Bowie or my Bowie, but his is a damned good Bowie regardless.

“If you feel safe in the area you’re working in, you’re not working in the right area,” Bowie says at one point in the movie, and Brett Morgen has taken that statement to heart. He’s made a film that may shake you and batter you on its way to moving you, and one that never feels safe.