A daughter laundered £8,510 for her dad who destructively burgled businesses across the UK. Gary Platt and his gang stole more than £45,000, leaving a trial of destruction in the process.

The 43-year-old helped use axes to smash up safes and break down doors, wreaking £35,000 of damage in the process.

Platt, Anthorn Close, Noctorum, Birkenhead, was jailed for six years in February 2020. As detectives continued to look into his crime they discovered a trail leading to his daughter Chloe.

The 24-year-old, of Netherfield Close, Noctorum, paid money stolen in the raids into her accounts. She told Liverpool Crown Court that she was “used” by her dad and now felt “gullible and angry”. 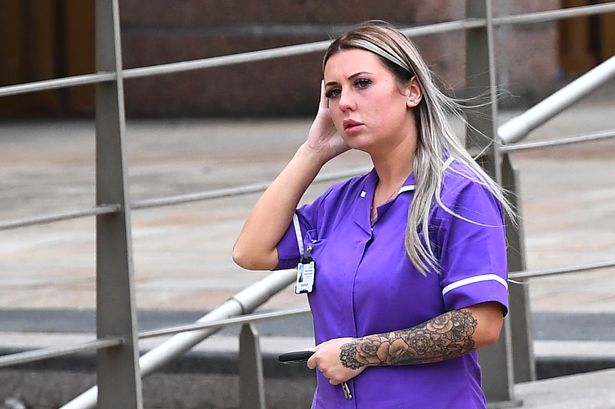 They also targeted homes and stole high-powered cars to use as getaway vehicles. Simon Duncan, prosecuting, said a few days before the conspiracy began, it was thought the same gang hit a Stagecoach depot in Saighton, near Chester.

The next day Chloe Platt paid £360 “derived from that burglary” into her account. On September 13, the gang struck at the Stagecoach depot in Saighton again, when £9,000 was stolen, and that same day, Chloe Platt deposited £2,000.

On each of these occasions the money was then transferred to her dad’s account – totalling £4,870. However, after a raid at the Blind Pig bar in Telegraph Road, Heswall, she deposited £3,640 on September 17, which wasn’t transferred to her father.

Chloe Platt, who had no previous convictions, gave a no comment interview to police in September 2020.

Mr. Duncan said she admitted possessing criminal property after entering a basis of plea accepted by the Crown.

“She said ‘I accept that my father asked me if he could use my account to deposit some money and money was then transferred to his account’.”

Mr. Duncan highlighted the one time the money wasn’t transferred to her dad but said he didn’t believe this would affect the outcome of the sentencing hearing, and this point wasn’t challenged.

The prosecutor said: “She stated she should have asked more questions, she was suspicious as to where the money had come from, but she felt so under pressure, she couldn’t question her father that way.”

The court heard she didn’t claim she was “coerced” by her father, but rather this pressure was because of the “dynamics” of their relationship.

Mr Duncan said there was no Proceeds of Crime Application (POCA) against Chloe Platt, adding: “Essentially the defendant is saying she didn’t benefit from what went on, she was being used by her father for the depositing of illicit funds.”

Carmel Wilde, defending, said the money laundering was now two years ago. She said Chloe Platt’s aunt was sitting in the public gallery, who explained how her niece went through difficult times when her parents split.

Ms. Wilde said: “It seems as though the defendant has found herself in a very tricky position between mother and father and it’s misplaced loyalty to her father that has led her to this offense.

“It’s perhaps understandable, a young girl wouldn’t start interrogating her father who she trusted to an extent and naively didn’t question.”

Ms. Wilde added: “It’s a particularly low act in my submission for a father to involve his daughter in his offending, who is of previous good character.”

She said: “Your honor will see she has a good job and is in respectful employment. She feels gullible and angry now.

“Her mother also sits at the back of the court. One can see how she was not best pleased with her ex husband’s attempts to lead their daughter down this path.”

The judge, Recorder Ian Unsworth, QC, said: “Chloe Platt, through the dynamics of the relationship with your father you agreed in accordance with your basis of plea to channel certain funds – that were obviously dishonest in nature – to channel those into your account.”

He said more than half of the cash was forwarded on to her dad, adding: “You allowed yourself to be used in the way you did.” Recorder Unsworth said: “What you did was vital and integral to that process. Those engaged in such processes want their funds washed and cleaned.”

He accepted the dynamic between daughter and father meant she “felt under pressure because of that relationship and you couldn’t question your father as you would have wished to”.

The judge said: “No doubt this has put added stress on your mother and others who care about you.” He said: “At the age of 24 you have a good job, you are a public servant. You have thrown away your good character, all for this.

“However, I do accept on the basis the Crown put this case and on their analysis of the evidence this was not a case of you yourself enjoying the fruits of other people’s dishonest labors. You were not enjoying the life, as sometimes happens in cases such as this.”