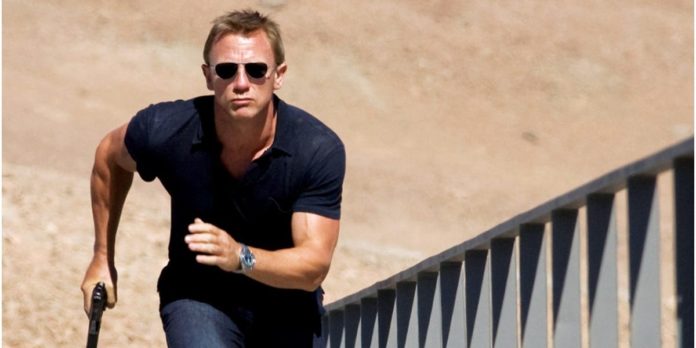 Daniel Craig’s final outing as James Bond hits US theaters on Friday, but during a recent interview, Craig spoke about the uncomfortable experience he had shooting his second Bond film “Quantum of Solace” and the final cut of the film, which he described as “shit show.”

“I would sort of yearn [for] the person I was when I did ‘Casino.’ Too much knowledge sometimes is not a good thing,” Craig told The Empire Film Podcast about the freedom he felt whilst shooting his first Bond film “Casino Royale.”

“I was sort of in the dark about a lot of things, about how things worked, the mechanics of it, how the world really viewed Bond — all of those things. I just didn’t understand them.”

However, Craig continued to say that as he grew into the role the weight of the industry around the 007 franchise started to “bore” him down and affect his performances.

“The trouble with [‘Quantum of Solace’], it was a bit of a shit-show, to say the least, the full weight of it was there I kind of think that made me probably lock up,” he said. “Thankfully, for me, it’s been about loosening it and loosening it and trying to get back to that feeling of ‘Casino,’ which was ‘It’s James Bond, come on, enjoy yourself. Let’s have a good time.'”

“Quantum of Solace” took home over $500 million at the worldwide box office but was widely panned by critics and has often been considered the worst film in Craig’s series of 007 films. In a review for The Boston Globe, double Pulitzer Prize winner Wesley Morris said: “Frankly, Quantum of Solace is just one exasperated dressing down away from being Lethal Weapon 9.”

Later during the interview, Craig spoke about the confidence he felt during the production of “Casino Royale.”

“I remember [shooting ‘Casino Royale’] with massive fondness,” he said. “And all this other shit was going on around it, which was meaningless at the time because I knew we had a good film, I knew ‘Casino’ was good. You kind of go, ‘Wait and see, it’s going to be great, don’t worry.'”

Both Craig and Barbara Broccoli, one of the lead James Bond film producers, recently reflected on “Quantum of Solace” during the behind-the-scenes Apple TV documentary “Being James Bond” and attributed some of the production mistakes to the 2008 Writers Guild of America strike.

The 100-day strike in which all film and television screenwriters of the WGA downed their tools was prompted by a halt in negations between the major Hollywood studios and the writer’s guild who demanded a greater share of the revenues generated when films and TV shows are distributed on the Internet and on other new media devices.

“We had a writer’s strike. We had a script; it wasn’t completed, but it was nearly completed. The movie kind of works. It’s not ‘Casino Royale,’ and that was always going to be… It was like, literally, troubling second album syndrome,” Craig said. “In a way, we could not top ‘Casino’… It’s easy to say that. Of course, we wanted to top ‘Casino Royale,’ but, you know…”

Broccoli added: “We basically started shooting without a script, which is never a good idea. But the script was turned in, and I remember the writer who turned the script in picked up his check, and then picked up his placard and stood outside the studio striking. We were kind of screwed, and we all had to muddle in and try and make the story work, and it wasn’t really working that great. But I look back at the movie, and you know, it’s still a good movie.”

Over the weekend, Variety reported that Craig’s final Bond film “No Time To Die,” which has opened outside the US, is set to rake in $113 Million in its opening weekend. This would make the film the most successful opening of the pandemic.