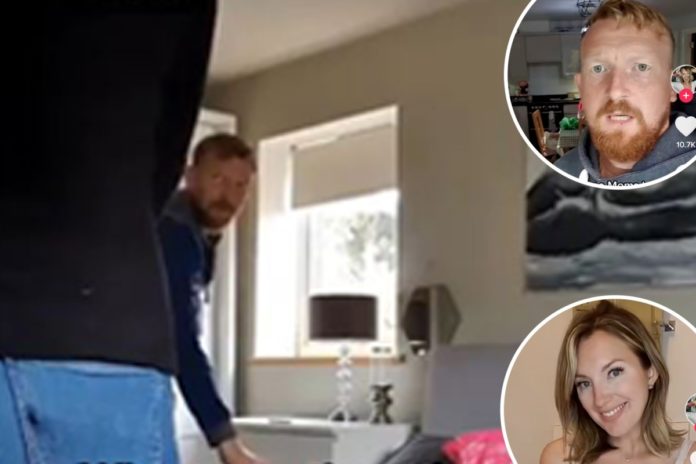 HAVING NO FILTER a dad-of-four has gone viral for his shocking response when he found out his wife was pregnant with his fifth child.

Telling her hubby with a sweet gesture by hiding her positive test under their kids’ toys on the bed, the man’s shock led to some hilarious comments.

Taking to her TikTok channel to share her hubby’s reaction to the baby news she captioned the video “When you think your fourth child is your last child.”

Discovering her pregnancy test under toys the shocked hubby said “oh no”, followed quickly by “genuine?”.

The woman captioned this moment “looks for a camera” as it seemed her husband was thinking this was a prank.

Walking away burying his hands in his face, the mum laughs as he says “that’s what we need right now.”

He then asks his wife “Whose is it” while she continues to laugh at his shock he adds “where are we gonna put it.”

Eventually calming down, he embraces his wife and says “I love you with all my heart.”

In the title of the video, the mum writes “husband’s reaction is priceless! I can confirm he has got over the shock & very happy.”

The post has been met with a range of comments from people who find the reaction hilarious.

“‘Where are we gonna put it?’ Exactly what my husband would say” commented one woman.

Another said “Haha that was so funny. This is real life: funny and sweet in the end.”

Speaking of children, see how many dirty nappies is ‘normal’ to what a sleep schedule should REALLY look like – baby expert answers common Qs.

And this mum-of-seven says ‘three of my kids have birthdays in the same week – I need their birth dates tattooed so I remember them.’

More on parenting, see how one woman’s son was born HANDS first, he was shaking doctors’ hands as they tried to deliver him.