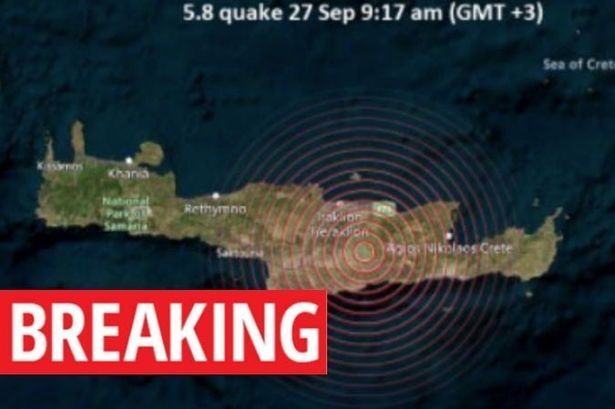 An earthquake with a 6.5 magnitude has rocked the Greek holiday island Crete.

The earthquake occurred at 6.15am on Monday, and was reportedly felt in Bulgaria, Turkey, Egypt, Italy, Libya and North Macedonia.

The European Mediterranean Seismological Centre (EMSC) said the quake had a depth of 1.24 miles and occurred 14 km southeast of island capital city Heraklion.

The EMSC also tweeted: “This is the 3rd felt #earthquake in Crete, Greece in the last 30 minutes.”

Pete Goodwin, who was preparing to fly back to Britain, said on Twitter: “Just experienced a very strong earth tremor/earthquake in Crete!”

One user on Twitter said: “Let’s just say I got scared to death! A big one that lasted for quite sometime. We are ok here in Rethymno (city in Crete) tho.”

Another said: “Nothing quite like being woken up by an actual earthquake! Whole room shaking from side to side.”

The earthquake comes after a 4.2 magnitude quake rocked the nearby holiday island Kos, which recorded a shallow depth of 10 km beneath the epicentre on September 11.

Greece is common for earthquakes and is one of the world’s most seismically active countries.

However, most Greek earthquakes are relatively mild compared to those in other parts of the world.

Previous articleJuventus’ Alvaro Morata to be robbed of Chelsea reunion after picking up injury
Next articleBarbara Eden Had to Hide Her Long-Awaited 1st Pregnancy during Filming, Even from Co-star Clint Eastwood