Snackers love chips and guacamole, but these carb-heavy snacks are filled with unhealthy fats and empty calories. Whether you want to switch up your snacking game or just want something healthier, Courteney Cox is here to help. 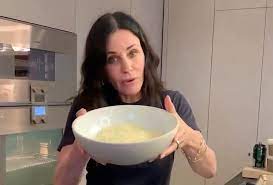 Cox is proving that she can also be a star in the kitchen, just like Monica Geller. Cox never misses an opportunity to make banana bread, chicken Bolognese, or coco e Pepe. And it wasn’t just us who felt the Monica vibes. One fan commented, “Just Monica being Monica!”

On her latest cooking spree, Cox took to Instagram and shared her favorite recipe for keto chips, which she got from the food account @thebigmansworld.

How To Make Courteney’s Keto Chips and Guac

Making homemade chips and guac might seem like an unnecessary hassle, especially when you’re craving a quick snack. Cox shows us that it’s as simple as 1-2-3 to make her keto snack.

Cox shared her Insta-worthy recipe with her followers by saying she was making keto mozzarella chip! She explained, “All you need is two cups mozzarella,—shredded—one cup blanched almond flour, and some seasoning, garlic powder, onion powder—it’s your choice—paprika!” She continued, “And now I’m going to microwave this for one to two minutes.”

As Ed Sheeran’s Bad Habits blares in the background, Cox sets to work, on a mission to show her followers that these keto chips are anything but a bad habit!

After the Friend’s star removes the melted mozzarella cheese from the microwave, she adds the almond flour. She mixed the ingredients together with her hands and added seasonings.

Cox flattens her dough ball quickly using a rolling pin. She creates triangular shapes with a pizza cutter that looks like tortilla chips. She bakes the chips at 350 degrees on a baking tray.

Cox makes homemade guacamole while her keto chips bake. You don’t need to go to the grocery store when you can make it yourself.

Cox shows off her keto mozzarella chips by taking them out of the oven and placing them on the counter. The tortilla chips are just as good, if not more, than the real thing! Healthy and easy to make, who’d have thought? Courtney, it’s obvious!

Ready to give up your bad habit and switch up your chips and guac game for Courteney’s Cox’s healthier recipe? 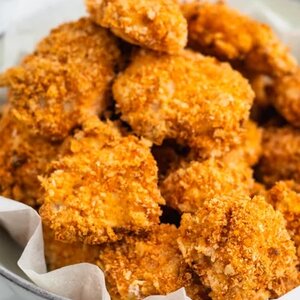 Previous articleThis Is What Happens When You Eat Garlic Every Day
Next articleKate Middleton and Sophie Wessex are ‘naughty, fun and cheeky’