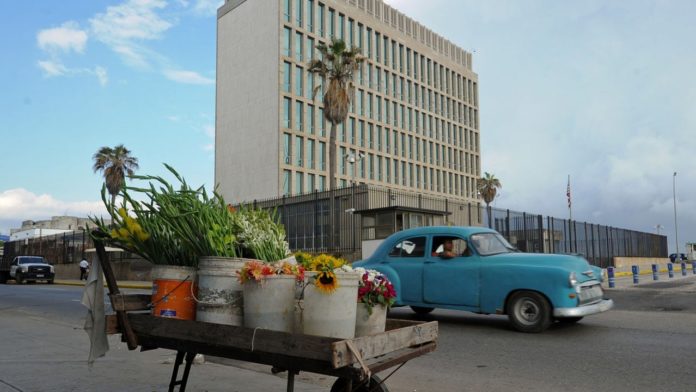 Crickets may be the cause of a mysterious illness U.S. diplomats came down with in Cuba, not microwave weapons, according to a declassified scientific review commissioned by the U.S. State Department and obtained by BuzzFeed News.

The State Department report was written by an elite scientific board known as the JASON advisory group. The report was completed in 2018, two years after many diplomats had reported a mysterious illness later referred to as “Havana Syndrome,” Buzzfeed reported. JASON has reviewed U.S. national security concerns since the Cold War.

“No plausible single source of energy (neither radio/microwaves nor sonic) can produce both the recorded audio/video signals and the reported medical effects,” the JASON report concluded. “We believe the recorded sounds are mechanical or biological in origin, rather than electronic. The most likely source is the Indies short-tailed cricket.”

After diplomats and CIA officers at the American Embassy in Havana, Cuba, mysteriously fell ill, the Pentagon sent a memo to all military personnel, civilian officials and contractors to report any sickness to the Department of Defense, The New York Times reported earlier in September.

The illness, which has been dubbed “Havana Syndrome,” had been called an “act of war” by some, while others have said it could be a new form of surveillance, according to BBC.

“I am absolutely determined — and I’ve spent a great deal of time and energy on this in the four months that I’ve been CIA director — to get to the bottom of the question of what and who caused this,” CIA director William Burns told NPR in August.

What Is “Havana Syndrome?”

The first cases of “Havana Syndrome” were reported by CIA officers in Cuba in 2016. The officers were told to keep the illness a secret but word got out, BBC reported.

Panic and anxiety spread as cases developed with some told that what they were feeling was “all in the mind,” BBC said.

While no one knows where it comes from, it has caused Americans to suffer nausea, headaches, pain and vertigo.

However, five years later, as similar cases have emerged involving other diplomats around the globe, the Pentagon is trying to crack what it is.

“I’m certainly persuaded that what our officers and some family members, as well as other U.S. government employees, have experienced is real, and it’s serious,” CIA Director William Burns said.

Initial beliefs were that the Cuban government was using a weapon blasting microwaves that went beyond the range of human hearing as Americans began visiting the country in late 2016 as the boarders opened for tourism, but as cases developed around the globe, the theory has been sidelined, according to BBC.

“It is global — but there seems to be an awful lot going on in Europe,” one American official told NBC News in July.

As of July 2021, 200 Americans have reported possible symptoms of “Havana Syndrome,” officials said, according to NBC News.

While American diplomats and their families, as well as military personnel and spies have been the majority of folks to report cases, Canadian officials have said they have contracted the mysterious illness, according to New York Magazine.

The possible roots to this strange illness could be found in the Cold War as BBC reported that the era was a time that saw “science, medicine, espionage and geopolitics collide.”

Since President Joe Biden has taken office in January, over two dozen cases of “Havana Syndrome” have been reported from Vienna, Austria, which has been “a global capital of spycraft since the early days of the Cold War,” New York Magazine said.

A theory that is being explored is that a number of American adversaries are teaming up to launch these microwave attacks.

“But Cold War-era surveillance technology developed by the Soviet Union proliferated to other countries, each of which has equipment that could prompt symptoms similar to previous attacks,” The New York Times reported. “In at least some of the Havana syndrome cases, the technology was used by the G.R.U., Russia’s military intelligence agency, to eavesdrop but not to deliberately injure, according to some American officials. But other later episodes look more like deliberate attacks by the G.R.U., these officials said.”

House Intelligence Committee Chair Adam Schiff will not count out that foes could be ganging up on American personnel.

“Far too many ‘Havana Syndrome’ victims have had to battle the bureaucracy to receive care for their debilitating injuries. American personnel who have undergone these attacks while serving our country should be treated the same way we would treat a soldier who suffered a traumatic injury on the battlefield,” Maine Republican Sen. Susan Collins, a coauthor of the bill, said in a statement.