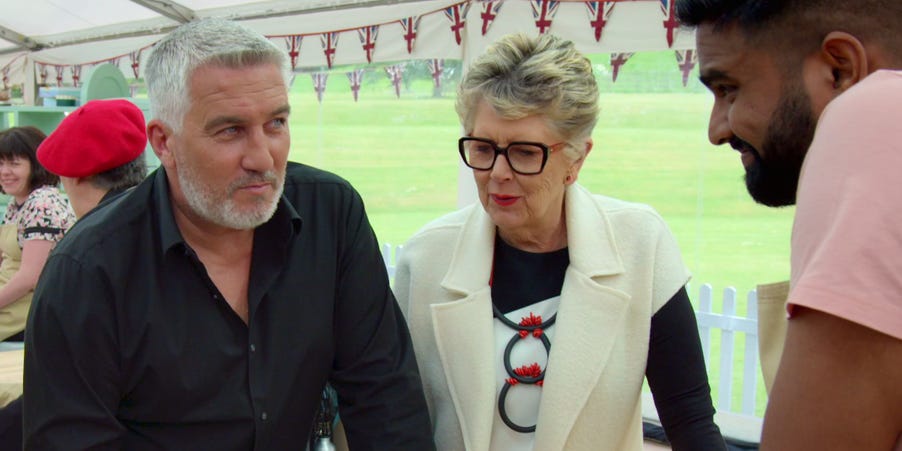 After hours of watching “The Great British Baking Show,” its judges and presenters can feel like old friends — but what are they like when the cameras aren’t rolling?

Insider spoke with several former contestants from various seasons of the show, known as “The Great British Bake Off” in the UK, to hear about their experience working with the series’ famous cast.

Before she left the show in 2019, judge Mary Berry balanced out fellow judge Paul Hollywood’s intimidating persona for seven years.

Berry’s fans will be pleased to learn that she is as charming in real life than she appears on TV.

Season-four baker Ali Imdad recalled a time when the “lovely” judge comforted him during a difficult moment even though they weren’t being filmed.

“I remember once I was having a panic attack because my ganache just wasn’t setting,” He said. “There were no cameras, but she still just came up to me and gave me a hug and said, ‘Just remember, it’s just cake.'”

Sue Perkins and Mel Giedroyc, who hosted the first seven seasons of the show, were known for bringing a certain comedic flair to each episode. However, some bakers weren’t always able to find the time for their antics during stressful situations.

Imdad also competed on the third season of “The Great British Baking Show: Holidays,” and he recalled a moment when the hosts interfered with the bakers’ focus.

“I was with Cathryn Dresser,” Insider asked him to repeat this. “Her bakes weren’t going very well, and Mel and Sue came and they were just sort of having a laugh and a joke, and I remember Cathryn saying to me, ‘I just need to finish up my bakes. Can they just please leave me alone?'”

He continued, “So if you’re having a bad time, it’s probably a little distracting and annoying. but obviously, they always mean well — minus Paul.”

Contestants liked Sandi Toksvig, but one said she didn’t seem to have much of a sweet tooth

Despite being a copresenter on a baking-competition show, Sandi Toksvig doesn’t seem too keen on sweets herself.

“None of the judges ever spat the food out to avoid weight gain, but I think Sandi sometimes didn’t try bakes,” Insider heard from Stacey Hart in season 8. “I don’t think Sandi’s got a particularly sweet tooth, but she loves cheese so she always ate anything with cheese.”

However, her sweet tooth does not stop her being a generous host. Hart said Toksvig is a “lovely woman” who the contestants fondly referred to as “Auntie Sandi.”

Fans often wonder what the show does with all the leftover baked goods after a full day of shooting.

Hart said that the dishes are shared between contestants, hosts and judges as well as the crew. Prue Leith appears to have taken care the leftovers since her 2017 appearance on the show as a judge.

“They spread it all out on a table and whatever scraps are left over Prue apparently takes home to feed her pigs,” Hart spoke to Insider. “That’s what I was told.”

Although Leith has previously spoken about feeding scraps from the show to her neighbor’s pigs, she later said she stopped after learning it could make them sick.

Copresenter Noel Fielding takes a vested interest in the contestants

Copresenter Noel Fielding joined “The Great British Bake Off” for season eight in 2017.

His quirky comedy is a great way to lighten the mood and, according former contestants to Insider, he’s also kind and supportive off camera.

Insider heard Hart say that he makes it a point of getting to know each contestant before they even get on the set.

“In the beginning, the first day we walked into the tent, everyone was nervous,” She said. “Noel came up and gave us a big hug. He knew everything about me.”

Paul Hollywood seems pretty intimidating on the show, but some former contestants said he can be more annoying than scary.

“Paul tries to put on this persona of, you know, just sort of lingering behind you and trying to catch you out,” Insider heard from Imdad. “And it’s cute the first time around, but after a while, it’s like, ‘Could you just go away?'”

He continued, “I guess it’s cute when you’re watching on TV, but when you’re a contestant, you just sort of want to push him off.”

“I got a bit annoyed,” Hart told Insider. “In the semifinals, Paul made a few comments I didn’t like. He came to my workspace and said, ‘Oh, got a bit of a mess on here. A messy table is a messy baker’ or something like that, and I’m like, go away. I’m just trying to do my job.”

But he doesn’t scare everyone, and sometimes he’s pretty helpful

Despite Hollywood’s reputation as the tougher judge on the show, not everyone dreads facing him.

“Some may fear Paul Hollywood, but he does not scare me,” season seven’s Rav Bansal told Insider

Hart also said she wasn’t fazed by Hollywood’s persona, telling Insider, “Paul tries to be intimidating, but he didn’t scare me.”

She continued, “He’s nice enough. I only liked him when he liked my stuff. I didn’t like him when he didn’t.”

Season nine’s Antony Amourdoux said the scariest thing about Hollywood was being judged by him because he’s such a talented baker.

“He is technically so sound, he’s unbelievable,” Amourdoux said. “I would say he is the scariest judge because he can proper tell you off if it goes wrong.”

Hollywood is always happy to offer advice to bakers.

“As much as he is scary, he does help bakers with his tips and tricks,” Another contestant agreed. “Bread week, he comes alive. Other weeks he’s not normally in the tent as much, but bread week he’s walking around spending good time in the tent watching every single baker.”

One contestant said Hollywood’s appearance could get distracting

Amourdoux said that the judge’s handsome looks were sometimes distracting.

Overall, Hart said most of the hosts and judges are pretty friendly and welcoming

Hart told Insider that the judges and hosts she interacted with were pretty welcoming and kind overall but that Hollywood didn’t seem quite as friendly.

Recalling her first time in the tent, Hart said, “They all came in and made us feel good. The one person who didn’t? Paul. He stayed outside.”

She continued, “I didn’t have any communication with him until the first judging.”

Representatives for Hollywood, Leith, and Toksvig did not immediately respond to Insider’s request for comment.