Chris Rock says he’s ‘Processing.’ Will Smith Slaps and Will Talk About it ‘At some Point.’

Chris Rock was said Wednesday night that he’s still “processing” the whole situation with Will Smith, and that he’ll be addressing the incident “at some point” in the future — but not today.

The comments came at the beginning of a sold out stand up show Wednesday night at the Wilbur theater in Boston, Rock’s first public appearance since The Slap.

“I don’t have a bunch of s— about what happened, so if you came to hear that, I have a whole show I wrote before this weekend. I’m still kind of processing what happened. So, at some point I’ll talk about that shit. And it will be serious and funny,” Rock said. 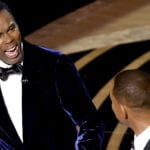 Rock has been largely silent about the incident, when during the 2022 Oscars on Sunday Smith slapped him after Rock told a joke about Smith’s wife, Jade Pinkett Smith. Before viewers and attendees came to an agreement on the fact that Smith was outrageously outlandish, it caused a sharp divide. Since then Smith’s actions have been condemned by the Academy, 2022 Oscars co-host Wanda Sykes, BAFTA, and even Kareem Abdul-Jabbar, among others.

Smith, for his part, did not offer an apology directly to Rock when he accepted his Academy Award as Best Actor on Sunday. However, a Monday statement was posted to his Instagram account in which he officially apologized.

“Violence in all of its forms is poisonous and destructive. My behavior at last night’s Academy Awards was unacceptable and inexcusable. Jokes at my expense are a part of the job, but a joke about Jada’s medical condition was too much for me to bear and I reacted emotionally.  I would like to publicly apologize to you, Chris,”Smith wrote. “I was out of line and I was wrong. I am embarrassed and my actions were not indicative of the man I want to be. There is no place for violence in a world of love and kindness. I would also like to apologize to the Academy, the producers of the show, all the attendees and everyone watching around the world. I would like to apologize to the Williams Family and my King Richard Family. I deeply regret that my behavior has stained what has been an otherwise gorgeous journey for all of us. I am a work in progress.”

We’ll have to wait somewhat longer to find out if Rock accepted this apology.

Previous articleAndrew Garfield could be Spider-Man in Morbius’ universe.
Next articleWhat happens if you skip a probiotic for a few days?