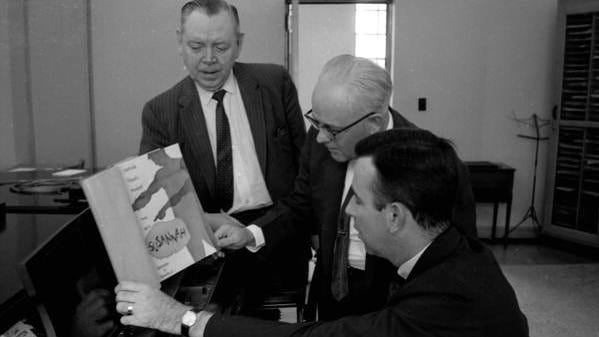 In 1947, a 20-year-old Carlisle Floyd, then a recent graduate of Syracuse University, arrived at Florida State to teach piano.

It was while teaching at the College of Music — which awarded its first bachelor of music only 36 years earlier – that Floyd began focusing seriously on composition, and laying the foundation for accomplishments that earned him international acclaim as the “The Father of American Opera.”

Floyd, who remained on the faculty from 1947 to 1976 before accepting the M.D. On Thursday, the Anderson Professor of music at the University of Houston died. He was 91.

He was 95 years old and had been living in Tallahassee permanently since 1996.

“Carlisle Floyd, a beloved professor in our FSU music program from 1947 until 1976, shaped American music for decades from his office on campus,” FSU College of Music Dean Todd Queen told the Tallahassee Democrat, part of the USA TODAY Network, in an email.

“His transformative opera ‘Susannah,’ written and premiered at FSU, is part of a lifelong musical story including a Grammy nomination in 2021 for his most recent opera, ‘The Prince of Players.’ His legacy as a composer and teacher will always remain a vital chapter in the rich tradition of the College of Music.”

A maker of masterpieces

It was at FSU that Floyd’s earned reputation as a cultural icon got its start.

On Feb. 24, 1955, the Latta, South Carolina, native and son of a Methodist preacher who took his first piano lessons from his mother, presented what would become his most famous work, “Susannah,” at FSU’s Ruby Diamond Auditorium.

The masterpiece, written between 1953 and 1954, is the third most performed American opera (after “Amahl and the Night Visitors” and “Porgy and Bess”), according to Opera News.

The special market publication described it as “the apocryphal tale of Susanna and the Elders retold in the heart of the Tennessee Bible Belt” — a region Floyd knew thoroughly, drawing on his childhood memories of hot summers during which a revival meeting would supply “these rural, remote people their meager allotment of excitement for one week of each year.”

Floyd, in a Dec. 7, 2011 interview with FSU, spoke humbly of what turned out to be a work that helped shaped the direction of opera.

“I was an assistant professor of music and I had come here at the very tender age of 21 to join the faculty,” He said it in the YouTube video. “I wrote an opera called “Susannah,” but as they say, ‘on spec.’ Nobody had commissioned it and I wrote it simply because I wanted to write it. It was my goal to launch an opera career, without knowing or believing that it would succeed. I didn’t think of myself as a composer until ‘Susannah’ was done.”

The response to “Susannah,” which was premiered by the New York City Opera in 1956, propelled Floyd to the national level. The following year, it won the New York Music Critics’ Circle Award and subsequently was chosen to be America’s official operatic entry at the 1958 Brussels World’s Fair.

“Of Mice and Men” (1969) — based on the John Steinbeck novella — is another of Floyd’s works most performed throughout the world. The Ford Foundation commissioned it and the Seattle Opera gave it its debut in 1970.

“Bilby’s Doll” (1976) and “Willie Stark” (1981), were both commissioned and produced by the Houston Grand Opera, the latter in association with the Kennedy Center. A televised version of the world premiere production of “Willie Stark” opened WNET’s Great Performances series on the PBS network in 1981.

Throughout his career, Floyd returned to FSU’s campus, where he marveled at its growth and the expansion of the College of Music.

Floyd was present at a tribute held by FSU College of Music in September 2011 at the Ruby Diamond Concert Hall.

Earlier that year, he donated his manuscript scores for “Susannah” and “Wuthering Heights” to the college and gave funds to create the Carlisle Floyd Endowment for Opera, the university said.

In 2017, at age 90, Floyd was on hand for the Florida State Opera’s production of “Prince of Players.” It is the story of a cross-dressing actor in 17th-century England who pushes gender barriers, takes advantage of high-society groupies, tricks a nobleman into thinking he’s a female prostitute, sings a bawdy barroom tune and carries on a secret love affair with a wealthy male friend, according to an account by retired Tallahassee Democrat columnist Mark Hinson.

“They forgot to tell me I couldn’t write about these things,” Floyd told Hinson with a laugh after a dress rehearsal in Opperman Music Hall.

“Prince of Players,” inspired by the film “Stage Beauty” (2004) and the play “Compleat Female Stage Beauty” (1999), had its world premiere at the Houston Grand Opera in March 2016.

The FSU presentation marked its Florida debut, with a much larger orchestra in the pit and bigger cast of singers, Hinson wrote.

“This is some opera program we have here,” Floyd told Hinson. “I’m not sure we deserve it, but we have it. They have such a wealth of voices and the level of talent is so high. Not enough can be said of their opera department here.”

Douglas Fisher, director of Opera Activities in FSU’s College of Music, said Floyd “became the standard bearer for American opera around the world, but always maintained his connection to FSU and Tallahassee.”

“Florida State Opera has presented four of his operas in recent years and he was a gracious, inspirational, and devoted presence at each one,”Fisher stated. “His operas will continue to delight for generations to come and his legacy lives on. “

Throughout his career, Floyd earned numerous awards and honors, including the Guggenheim Fellowship (1956), National Opera Institute’s Award for Service to American Opera (1983), and the National Medal of Arts in a ceremony at the White House (2004).

“Carlisle was hired by FSU (then the Florida State College for Women) when he was a few months prior to turning 21, in 1947, making him the youngest professor it had ever hired,” Jane Floyd Matheny, Fisher’s niece, said so. “FSU, and especially its College of Music, was Carlisle’s pride and joy. He loved his students and fellow faculty and continued lifelong friendships with many of them.”

Floyd was preceded in death by his wife of 53 years, Kay Reeder Floyd, in 2010. He is survived by four nieces, his sister Ermine’s daughters: Martha Matheny Solomon, of Charleston, South Carolina; Jane Floyd Matheny, of Tallahassee; Nancy Matheny Kitchin, of St. Simons Island, Georgia, and Harriett Olive Matheny, of Tallahassee.

Jane Floyd Matheny stated that a memorial service will be held in the future.