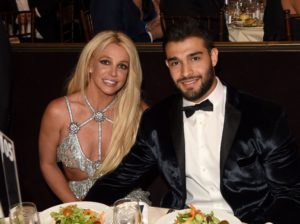 Britney Spears is head-over-heels in love with fiancé Sam Asghari! Days after the newly engaged couple announced they took the next step in their relationship when Asghari dropped to one knee and popped the question, Spears on Monday took to social media to pen a sweet message about their love.

In the Instagram post, which has since disappeared following Spears’ decision to deactivate her Instagram account “to celebrate my engagement,” the “Toxic” singer shared a photo from Asghari’s Men’s Health photoshoot that showed the 27-year-old personal trainer all but floating in the air. Spears reacted to their latest relationship milestone in the caption, writing that “words can’t even say how shocked I am.” Adding a diamond ring emoji, the musician went on to quip, “geez although the a-hole was way overdue.” Despite the wait, Spears said “it was definitely worth” it before she went on to gush, “yes world … that beautiful f-ing man in that picture is MINE. I’m so blessed it’s insane!!!!!” Asghari was quick to reply, agreeing with Spears when he commented, “Wayyyyyyy overdueee.”

Don’t worry folks … just taking a little break from social media to celebrate my engagement 💍😉 !!!! I’ll be back soon 💋🌹✨

The happy couple, who first met back in 2016, announced their engagement on Sunday in separate Instagram posts. Spears included a video that showed her displaying her engagement ring. It features a 4-carat round cut diamond and a platinum cathedral setting. The band is plain silver. In the clip, Spears said she was “ecstatic” about the proposal, adding in the caption, “I can’t f-ing believe it.” In his announcement, Asghari shared a photo of himself and his fiancée sharing a kiss as Spears held up her hand to give the camera a close view of the ring.

While details of the engagement are not known, it is clear that Asghari took great care to ensure the ring was perfect. Roman Malayev of Forever Diamonds NY, a jeweler, said that Asghari spent many months looking for the right designer before choosing Malayev. Asghari said, according to PEOPLE, “every designer I spoke with about the ring was amazing with great ideas, but I just clicked with Roman – we really connected on the design and he was as excited as I was to make it special – that’s why I chose him.”

Amid the flurry of chatter surrounding the couple in the wake of their engagement, Spears and Asghari are laying some groundwork for the future. Spears and Asghari have confirmed that they will be getting a prenup. This was something many encouraged her to do after she announced Asghari’s engagement. Recent reports claim that Spears’ team has already begun to draft the prenup and Asghari has stated her support for the move.