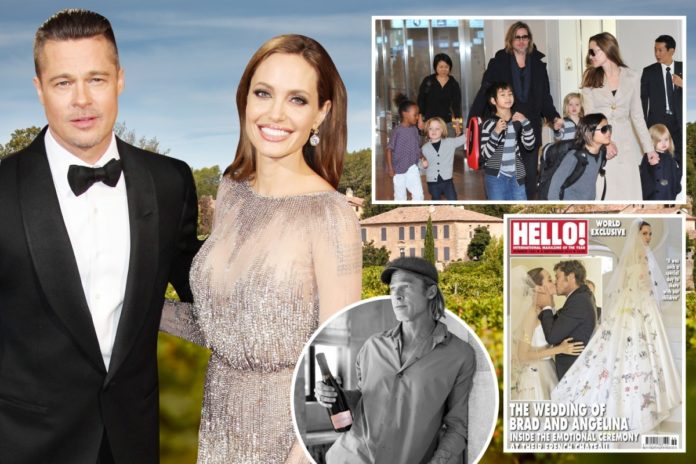 THE idyllic wine estate that was once a fairytale monument to the Hollywood love story of Brad Pitt and Angelina Jolie is now at the centre of their toxic break-up.

The couple, who got engaged and tied the knot at Chateau Miraval surrounded by their six children in 2014, planned to hold on to the £130million pile after they divorced in 2019.

Set amid its own gardens, the beautiful property in the South of France was once the pair’s dream home, boasting a moat and a rustic olive grove.

Sources say that Angelina (46), and Brad (57) hoped to make wine in the region and pass the business on to their children.

The 35-bedroom property, which was the latest twist in their five-year-old love battle, has brought them back together.

In a new lawsuit, Brad has labelled his former wife “vindictive” and claims she is bidding to offload her share without his agreement which would “cut him out” of the deal.

A round of mud-slinging

Paperwork states he had owned 60 per cent of the home and its winemaking business, with Angelina owning 40 per cent — until he agreed to transfer part of his stake across to her three years before their split, taking their holding to half each.

But after Angelina moved to offload her shares to investors, Brad claimed she had cost him his right to profit from the “incredible amount of work, time and money” he has put into building up the 1,000-acre estate, which produced the couple’s first wine, a pink rosé, in 2012.

Insiders believe that the latest scandal will rekindle their legal battles over their children’s custody and finances.

Representatives for the two stars were back in court on Monday for another exchange of legal arguments over their children’s futures — and yet another round of mud-slinging.

A source said: “Just as things seem to be settling down, another grenade goes off and there’s another round of bitter fighting in the courts. Brad thought they had an arrangement for the chateau. But Ange once more has the upper hand.

“What’s really unfair is he did all the work on making that place what it is, while she hadn’t done anything towards it. Now she wants to help herself to the profits.”

Brad hopes that because he handed over the extra ten per cent stake to Angelina for just one euro the deal should be considered void, because law in Luxembourg, where the case is being heard, insists assets should only be transferred for a “serious” amount of money.

Formal paperwork claims: “It is worth mentioning that, for the last four years, Jolie’s company did not act in the best interest of the business by systematically delaying the approval of the annual accounts and the renewal of the manager. We understand that behind this systematic obstruction, the real purpose of Jolie’s company is to sell its stake in Chateau Miraval in a way that would circumvent Pitt’s company’s right of first refusal — taking as a result a capital gain raised thanks to Mr Pitt’s company’s investment and to which Ms Jolie’s business did not contribute.”

What’s really unfair is he did all the work on making that place what it is, while she hadn’t done anything towards it. Now, she is tempted to take the money.

It came in the wake of an alleged bust-up on a private jet, during which it was later alleged Pitt had become embroiled in a fight involving the couple’s then 15-year-old son, Maddox. It prompted an investigation from the FBI, but Brad always denied hitting the teenager, and sources close to him claimed various accounts had taken “a kernel of truth” blown it out of proportion.

The couple’s divorce proceedings went on for three years before a judge formally declared each of them single in 2019 — but child custody disputes continued.

In June the actor was awarded joint custody by a judge — a decision that Jolie vowed to fight.

And this week paperwork filed by the actress accused her former husband of “gamesmanship,” and using his A-list status to win special treatment.

Angelina asked that Judge John Ouderkirk be removed from the dispute, as he had prevented their children from presenting evidence against their father. But new claims by Ange in fresh paperwork allege: “This sort of gamesmanship, a last-ditch effort by a celebrity litigant seeking special treatment, is not what this court’s limited review resources are for.

“There is nothing to see or review here. There is no issue meeting this court’s rigorous standards for, or worthy of, review.”

Just months ago, after winning joint custody, Brad blasted that Angelina’s testimony “lacked credibility” and said her attempts to appeal and delay the arrangement further would “work great harm upon the children, who will be further denied permanence and stability.” An insider added: “It feels like things are being thrown around on all fronts — mostly directed at Brad.

“They had formally settled custody, formally divorced, and formally agreed to financial arrangements which separated their assets fairly.

“Suddenly all of that is being torn up by Ange’s team who seem to think they can keep moving the goalposts as often as they want.

“It’s a total mess and exhausting for all involved. At this rate most of the children will be adults by the time custody proceedings are finished.”

Angelina brought a separate case against Brad three year ago alleging that he had not met his financial obligations to their children. He hit back furiously, claiming he had loaned her £6million to “assist her in purchasing her current residence” and paid “over £1million in bills for the benefit of Jolie and the minor children”.

It’s a total mess and exhausting for all involved. At this rate most of the children will be adults by the time custody proceedings are finished

His representatives added that her claims were “calculated to increase the conflict”.

The couple, who met on the set of 2005 action comedy flick Mr. & Mrs. Smith, remain two of Hollywood’s wealthiest stars, with Brad estimated to be worth £220million and his former wife just under £100million.

But despite her enormous fortune, she recently claimed she had been forced to go back to taking small film roles owing to the “change in my family situation”.

She stated that she had stopped directing films since she had largely stopped acting in the past decade.

She told Entertainment Weekly: “I love directing, but I had a change in my family situation that’s not made it possible for me to direct for a few years.

“I needed to just do shorter jobs and be home more, so I kind of went back to doing a few acting jobs. That’s really the truth of it.”

She previously said she struggled with the constraints of being a traditional mum, explaining: “I was never very good at sitting still.

“I feel like I’m lacking in all the skills to be a traditional stay-at-home mom.

“Even though I wanted to have many children and be a mom, I always imagined it kind of like (wildlife expert) Jane Goodall, traveling in the middle of the jungle somewhere.

“I didn’t imagine it in that true, traditional sense.”

Now, following her bitter break-up, Angelina is finding out life is not a rose garden — or a picturesque vineyard.