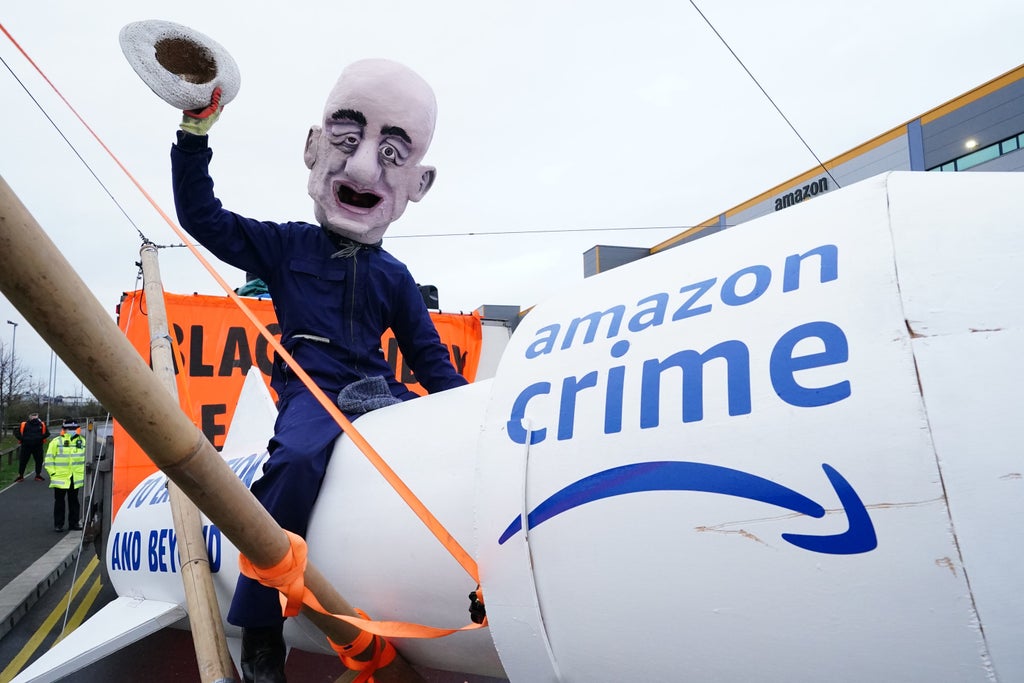 Climate activists have blockaded over a dozen Amazon depots in the UK, Germany and the Netherlands as part of a Black Friday protest.

Extinction Rebellion campaigners are blocking the entrances with bamboo structures, “lock-ons”, and banners. They intend to stay for “at least 48 hours”.

At the Tilbury protest, a caricature of Amazon founder Jeff Bezos is sitting on top of a rocket emblazoned with the words “to extinction and beyond” in reference to his recent trip to space.

In a statement, the group said they are targeting a total of 15 distribution centres, 13 of which are in the UK.

According to PA, the Dunfermline protest in Scotland began at 4am with about 20 activists. With “lock-ons” and placards, the protesters stopped lorries entering the Scottish site and some from leaving.

In a statement, the group said they are hoping to raise awareness for the “exploitative and environmentally destructive business practices” of the global retailer.

A spokesperson said: “Black Friday epitomises an obsession with overconsumption that is not consistent with a liveable planet.

“Amazon and companies like it have capitalised on our desire for convenience and stoked rampant consumerism at the expense of the natural world, trapping consumers inside a cycle of buying our way to oblivion.

“The reality is, COP26 has just passed and failed, for one primary reason; it is not designed to address the issue of an economic system that relies on unlimited growth at the expense of planetary survival.

“Billionaires like Jeff Bezos, who are more concerned with the space race than using his extreme wealth for good, are a byproduct of this toxic economic system.”

Protester Eleanor Harris, from Glasgow, said: “It is essential we move to a new model of economics that prioritises wellbeing and sustainability over profit.

“The era of exploitative throw-away capitalism will soon be over, either by changing to meet the challenges we now face or by the destruction of our global habitats and societies.”

Maciej Walczuk, a 19-year-old student, said: “We have to recognise that the consumption in the global north is largely based upon the exploitation of the working class and the global south, while companies like Amazon make massive profits and contribute to worsening the climate and ecological crisis.

“We need a new system that respects people and the planet, instead of blindly chasing profit.”

Previous articleViral TikTok of an alive turkey next to one in a baking dish sparks huge backlash
Next articleSimon Callow from ‘The Witcher,’ Boards Film The Pay Day’