Best and worst live TV musicals, from ‘Hairspray’ to Rent’ to ‘Grease’

Can NBC strike musical gold with its upcoming production of “Annie Live!”? It is unlikely, according to history.

Carrie Underwood presented a problem like Maria in NBC’s “The Sound of Music Live!” in 2013, marking a return of the live TV musical as a semi-regular event on broadcast TV. NBC is trying once again to bring the magic of Broadway to the small screen with “Annie Live!” (Thursday, 8 EST/PST), starring Taraji P. Henson as the evil Miss Hannigan and Harry Connick, Jr. as Daddy Warbucks.

But pulling off an enjoyable live musical, with all the talent required in front of and behind the camera, is no easy feat, and judging from the past nine years, not one that succeeds very often. The musicals of recent years have more often been disasters than successes, from bad acting to bloopers and injuries to not so-live performances.

In honor of “Annie” coming to NBC, we ranked the best and worst live musicals since “Sound of Music.” When they worked, they were stunning. They were failures when they failed.

Andrew Lloyd Weber’s religious rock opera proved an excellent choice for an Easter musical, staged like a concert more than a typical Broadway show. It works for this show, which brings punk rock to the Biblical story of Jesus Christ’s last few days from the perspective of Jesus, Mary Magdalene and Judas. With John Legend, Sara Bareilles and Brandon Victor Dixon in the three starring roles, “Superstar” sounded and looked superb. Although the show was somewhat hampered by an enthusiastic audience whose shouts sometimes overwhelmed the singing, it managed to put on an original show with great skill.

What the Fox staging of the 1950s-set musical understood – and so many of the failed attempts at the genre didn’t get – was having fun. Nobody had a better time than the young, vibrant cast including Julianne Hough, Aaron Tveit, Vanessa Hudgens, Keke Palmer and Carly Rae Jepsen. The hopping production bounced all over the Warner Bros. lot in Los Angeles, keeping up an infectious energy and staging huge, impressive dance numbers with a live audience to cheer on the actors. The production captured the grandeur of both the movie and the stage show but also felt aptly suited for television.

The only thing lacking in this emotional, colorful and impeccably performed staging of the classically irreverent take on “The Wizard of Oz” was a live audience to give standing ovations to the fantastic performances from Uzo Aduba, Amber Riley, Mary J. Blige and Queen Latifah. NBC later learned how a live audience improves the atmosphere of a show, but even with some silent moments between numbers, “Wiz” was so entertaining and bombasticit felt like your living roomwas transformed into a Broadway theater. Instead of trying to go big with the staging, producers wisely chose to keep it more subdued, which allowed the costumes, sets and vivid performances to stand out. The cast eased on down to a show-stopping production.

With a Broadway-worthy cast, fun cameos and a rollicking score to sing and dance to, “Hairspray” was the platonic ideal of the live TV musical. The show was a perfect choice for NBC, a popular musical with a heartwarming message and colorful costumes. Buoyed by favorable comparisons to the poorly received 2007 feature-film adaptation, “Hairspray” was an effortless good time that utilized the best parts of the Broadway show and the television format. Easily re-watchable and perfect for a sing-a-long, no other live musical has reached its heights yet.

More:‘Hairspray’ has plenty of luster as NBC’s best live musical

‘The Sound of Music Live!’

Back when NBC kicked off the modern live TV musical trend with this production starring Carrie Underwood, many thought this was as low as the genre could go. Sadly, we were wrong, and in retrospect, “Music” isn’t really that bad (and had the best ratings of the bunch). Underwood’s complete lack of acting ability made the musical cringeworthy at times; so did some of the staging snafus and awkward transitions. But the songs were belted with glee (no one questions Underwood’s powerhouse voice) and the production made TV musicals a relevant trend again.

It’s hard to categorize this oddball production as a live musical at all, considering ABC chose to only stage the songs from the animated classic, interspersed with scenes fromthe 1989 film. It was certainly cheaper than staging the musical in its entirety because of the whole underwater thing, but it led to a choppy, poorly paced event that could barely hold its audience’s attention. The singers (and they were really singers more than actors in this case) were mostly great (although Shaggy as Sebastian seemed like he had no idea what he was doing onstage), but the whole endeavor felt pretty pointless.

Especially compared to the very successful and entertaining “Superstar,” this attempt to inject the story of Christ with random rock songs and a hodgepodge of celebrity talent was an abject failure, and felt more like a PBS telethon than a coherent stage show. Good intentions and talented people were involved, but the “Passion” was more forgettable than anything else.

This version of the “Grinch” can be summed up in three words: stink, stank, stunk. Dr. Seuss’ classic children’s story was immortalized in a 25-minute animated special in 1966. More recent attempts to turn the simple story into a feature-length movie are futile, whether starring Jim Carrey (2000), Benedict Cumberbatch (2018), or, in this debacle, “Glee” alum Matthew Morrison.  A pelvic-thrusting, bad-punning, screeching version of the green curmudgeon was not what anyone wanted or needed amid the tragedies of 2020. Morrison did his level best – he’s a good performer – but the part simply never should have been written.

A victim of circumstance, poor planning and lackluster performances, this so-called live production of classic 1990s musical “Rent” was barely live at all, after one of the principal actors broke his foot before the metaphorical curtain could rise. The injury forced Fox to air a recorded dress rehearsal for most of the evening (with a small live section tacked on at the end), which lacked energy from actors who clearly weren’t giving it their all. Coupled with dizzying staging and camera work, a too-loud audience and awkward lines and lyrics substituted for curse words, “Rent” fell flat from the first note.

More:Not even live, Fox’s ‘Rent’ was more a season of lousy than love

As painful as shooting your eye out with a Red Ryder BB gun, Fox’s “Christmas” was a poor choice of material that led to a muted, awkward production. Sure, the producrtion looked nice – like “Grease,” it made great use of a huge studio lot – but great camera angles couldn’t bring out better performances from the child actors or add laughs when jokes fell flat. The film hits the nostalgia button (see how many times it runs on basic cable during the holiday season), but the musical version hasn’t had a large-enough audience to permeate the culture, and Fox’s telecast couldn’t make a meaningful connection with viewers.

More:‘A Christmas Story Live!’ It takes out its own eye

The biggest problem with NBC’s “Peter Pan,” the very bottom of the recent live TV musical barrel, is that it was a poor choice of a show to begin with. Even if the cast and staging had been good (and they weren’t), the old fashioned, kid-focused musical just didn’t play to a modern audience and didn’t work in the confines of television. The sets and costumes looked cheap, Christopher Walken sleep-walked through his performance as Captain Hook and Allison Williams proved a less-than-appealing Peter. It was bad enough to make you never want to return to Neverland again. 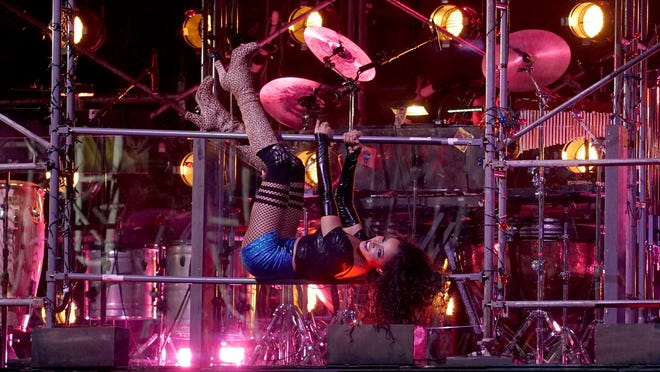 Previous articleAccording to the NHS boss, most vulnerable Brits will receive FOUR Covid jabs to stop Omicron spreading.
Next articleVegan who turned down vaccine over animal cruelty concerns has died from Covid