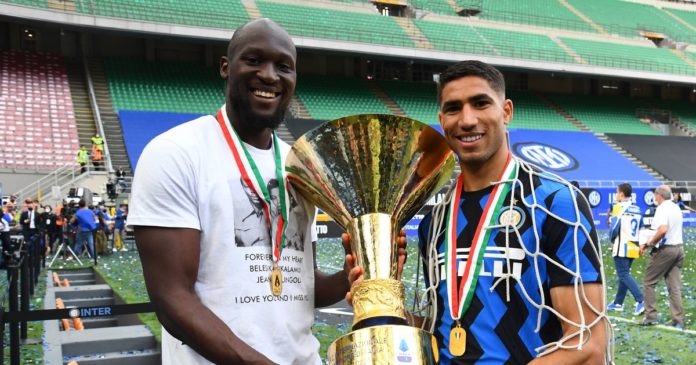 Achraf Hakimi was just one of the many stars that joined Paris Saint Germain this summer and arrived in the French capital after just one season at Inter Milan.

The Moroccan arrived in a deal worth €60million (£51.5m) and was brought in alongside a flurry of stars such as Lionel Messi, Sergio Ramos, Gianluigi Donnarumma, Georginio Wijnaldum and Nuno Mendes this summer.

Mauricio Pitchettino, boss of PSG has put together one the most talented sides in Europe. After losing in the final for 2019-20 and reaching the semi-finals last year, they now plan to take on the Champions League.

Chelsea had also been in the hunt to Hakimi, before the 22-year old chose Paris. Thomas Tuchel attempted with Romelu Lukaku to bring the Inter star to Stamford Bridge.

Hakimi explained to Chelsea why he rejected Chelsea’s proposal.

Hakimi was one of Inter’s Serie A-winning stars that was sold this summer due to financial implications at the Nerazzurri, with Lukaku signing for Chelsea in a deal worth £97.5m.

The 22-year old has admitted that he had received two offers but decided to accept the offer from PSG.

“I had two offers, one from Chelsea and one from Paris Saint-Germain,” he told L’Equipe.

“But I felt I had to come to Paris, that I would have been happy there.

“PSG is a great club, I really appreciate the support the fans gave me straight away. I was lucky because so many other champions joined me.

Hakimi is certainly not wrong in suggesting that PSG have a luxury of options in their squad after conducting their transfer business this summer.

But while Messi has lined up with Kylian Mbappe and Neymar have in attack, the front three have largely failed to hit the heights so far this season.

It is the Moroccan who has actually contributed three goals, two assists, and a late winner against 10-man Metz at weekend.