While “Squaring the Circle” comes from a photographer and video director who has made several other feature films in the past, including “Control” and “A Most Wanted Man,” “If These Walls Could Sing” is the directorial debut from McCartney, who nonetheless comes to the job with a real insider’s perspective: Her father is, of course, Paul McCartney, and she’s been coming to the studio made famous by her dad’s band since she was a baby.

In addition to McCartney, Page, Waters and Gallagher, the film also includes interviews with Elton John, Ringo Starr, Celeste, John Williams, Cliff Richard, George Lucas, Kanye West and Giles Martin, the last of whom meant that the daughter of Beatle Paul McCartney was interviewing and filming the son of Beatles producer George Martin. With all the family connections, you’d expect “If These Walls Could Sing” to be affectionate, and it is. Mary McCartney celebrates Abbey Road studio to the point where a couple of sequences in the film feel as if they could have been lifted from a promotional video, and she largely avoids the rockier stretches when the studio changed hands and could have been torn down if it wasn’t protected by the British government with English Heritage Grade II status.

But few people would head to a doc about Abbey Road looking for grit or controversy. You go for stories about the Beatles recording “Sgt. Pepper’s Lonely Hearts Club Band” (or, yeah, “Abbey Road,” the album whose cover turned the crosswalk in front of the building into a tourist attraction), or Pink Floyd creating “The Dark Side of the Moon,” or maybe for John Williams recording the score to “Raiders of the Lost Ark” or some of the “Star Wars” films, or Kanye West performing live there.

And all of those stories are in “If These Walls Could Sing,” which begins in 1931 with the transformation of a nine-bedroom townhouse in the St. John’s Wood area of London into a state-of the-art (such as that was in 1931) recording studio. There’s footage of British composer Edward Elgar recording one of his “Pomp and Circumstance Marches” there with the London Symphony Orchestra, before the movie jumps forward almost three decades to when Cliff Richard brought rock ’n’ roll to Abbey Road with “Move It.” 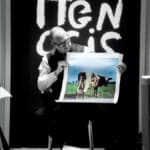 But Richard is just an appetizer to the big band, the Beatles, who recorded most of their albums there with George Martin partly because it was a good studio and partly because their record deal with EMI gave them unlimited studio time in a place the company owned. (Although everybody called the studio “Abbey Road” because that’s where it was located, its real name was EMI Studios; it was officially renamed after the Beatles’ “Abbey Road” album – not immediately after, as the film implies, but six years later.)

The movie jumps back and forth in time; sometimes it focuses on the studio itself, but sometimes the location is secondary to stories about the music that was made there. Classical artists Daniel Barenboim and Jacqueline du Pré get a segment, as do Cilla Black’s recording of Burt Bacharach’s “Alfie” and a young Elton John’s turn as a session pianist on the Hollies’ hit “He Ain’t Heavy, He’s My Brother.” John says he remembers “the smell of Abbey Road” – which he then admits that, in his case, was “the smell of fear” coming from a newcomer who was astonished to find himself in the same room with Paul McCartney at one point.

An early ’80s move to make the studio hospitable for recording film scores is presented as a key to making Abbey Road viable in that decade, and John Williams is as eloquent as anyone in the film in describing the virtues of the complex’s massive Studio A. Meanwhile, Noel and Liam Gallagher, the two frequently-warring brothers who headed the British band Oasis, are amusing as they predictably differ (in separate interviews) over whether Oasis was actually kicked out of Abbey Road for being too boisterous.

While the individual stories can be amusing, they add up to a grab-bag of vignettes rather than a cohesive portrait, assuming such a thing is even possible for a place that played host to so many decades of music. “If These Walls Could Sing” (title courtesy of Mary McCartney’s dad) is often charming and never less than affectionate, but it’s also slight, a pleasing but scattershot love letter to a building, a crosswalk and an era. Previous article
From problem-solving to memory boost, we test nootropic drinks that claim to feed your brain
Next article
BTS Busan Concert Venue changed ahead of October’s EXPO 2030 event