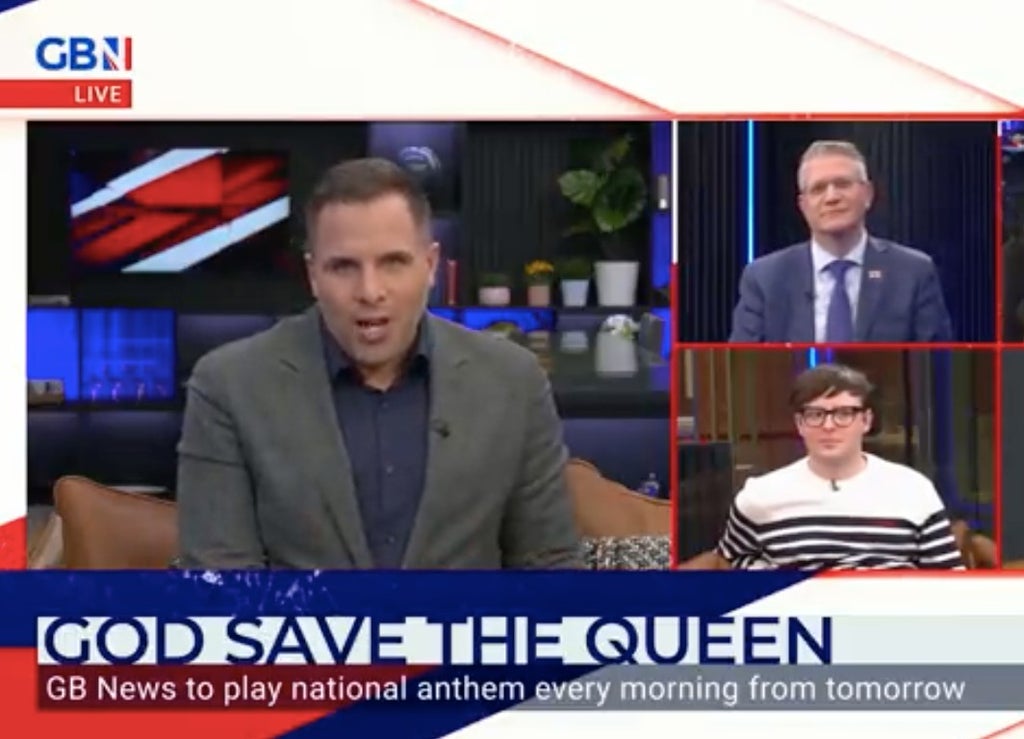 Outspoken news channel GB News is being ridiculed once again this week after it announced it would be playing “God Save The Queen” at the start of its live programming every day.

The plans, revealed on Monday, come after Romford MP Andrew Rossindell’s lengthy campaign to have the BBC play the national anthem at the end of the day before switching to News 24 – something the broadcaster stopped doing in 1997.

In a news release published on Monday, GB News’ editorial director Michael Booker said: “We always promised we would celebrate what’s good about our country when we can, and the Queen’s 70-year reign is definitely worth celebrating.

“We’ve chosen an uplifting instrumental version which, for our television viewers, will feature stunning scenes from across the UK.

“We think it’s a lovely way to start the day.”

Unsurprisingly, Mr Rosindell was thrilled with GB News’ decision to broadcast the anthem from Tuesday, saying the channel is “speaking for Britain”.

“GB News is leading the broadcast media in this country by playing the national anthem in the morning. I hope that ITV and BBC will follow the example of GB News and do the same – especially in this year of the Queen’s Platinum Jubilee,” he said.

By “speaking for Britain”, we hope Mr Rosindell means more than the 19 MPs who signed his early day motion (EDM)on the issue in 2010.

Six years later, during the EU referendum, Newsnight chose to poke fun at the Tory MP’s campaign by playing “God Save The Queen” – albeit the one by The Sex Pistols with a more provocative message at its heart.

And it isn’t just the BBC who have ridiculed the idea, with people taking to Twitter to mock GB News’ announcement:

In fairness, we take our hat off to anyone who wants to get up just before 6 am solely to listen to the national anthem because that’s a perfectly normal thing to do.

Previous articleWhat is Wordle answer 213 and what does it mean?
Next articleLeonine & Sky Deutschland Ink Enhanced Licensing Deal Covering